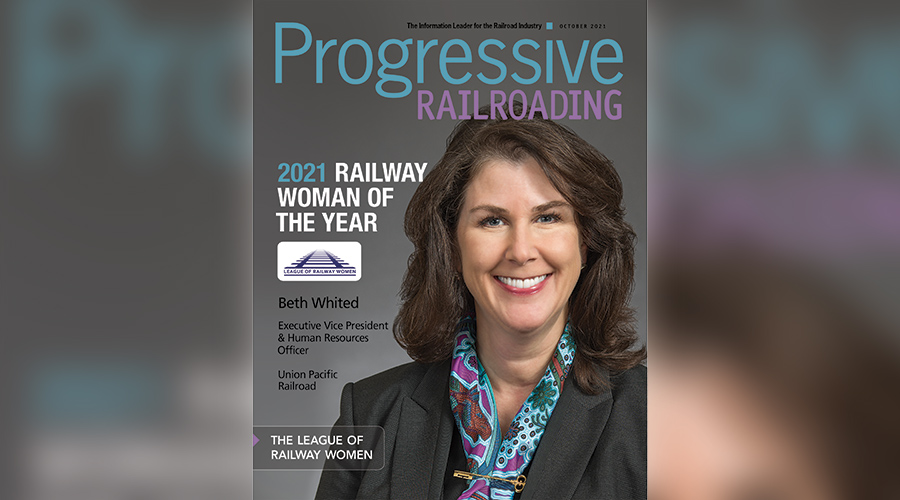 Beth Whited graduated from the University of Iowa with a bachelor’s degree in business administration on a Saturday, and on the following Monday went to work for Union Pacific Railroad.

That was 34 years ago, and she’s worked for UP ever since.

Today, Whited is UP's executive vice president and chief human resource officer. In October, she was honored by the League of Railway Women (LRW) and Progressive Railroading as the 2021 recipient of the Railway Woman of the Year award. The LRW presents the annual award to a woman in the rail industry who establishes a strong vision and culture of continuous improvement and creativity; overcomes challenges; and breaks down barriers.

The winner is also someone who promotes and supports initiatives to attract and retain women in rail; brings consistent excellence to her organization and surrounding community; and cultivates a safe work environment by demonstrating safe rail practices.

"Beth's commitment to Union Pacific and her focus on attracting and retaining women in rail is a cornerstone of LRW’s mission to cultivate and connect women in rail. Her efforts have given our industry wider depth and much needed talent and diversity,” said LRW President Amanda Trainor Patrick in a press release.

Fritz: Her work is exceptional

UP Chairman, President and CEO Lance Fritz can think of no one more deserving of the award than Whited, he said during a surprise appearance at the virtual LRW award ceremony held Oct. 19. He cited her longtime leadership at the company, but especially her accomplishments during the past 20 months of the pandemic.

"Your work on COVID with our teams was exceptional," Fritz told Whited. "You provided a steady hand and a lot of organizational savvy and prowess to help get us through that effectively. You did everything, from making sure the buttons on the elevators had antibacterial gel attached to them to making sure that we had enough nurses on hand to process all of the needs that were generated by COVID."

Fritz also praised Whited for her oversight of activities that directly affect UP workers, such as an employee stock purchase program and efforts to increase the number of women on the railroad’s operations team. He thanked Whited for leading the company's sustainability goals, describing her as the Class I's "environmental, social and governance (ESG) zealot."

Her ESG role has been key to UP, Fritz said, as the company writes its climate action plan, continues to enhance its annual sustainability report, publicly commits to greenhouse gas emissions reduction and increases the percentage of its workforce that's gender, racially and ethnically diverse.

Whited’' service at UP has crossed departmental boundaries. Prior to human resources, her executive positions have included strategic planning, investor relations, finance, marketing and sales and labor relations. The opportunities to move up and onto different business realms have kept her in railroading and at UP for the past three-plus decades.

"I have a low threshold for boredom," Whited explains. "It has been a great company to work for and the reason I’ve stayed is because I’ve had the chance to do so many different things, and I think I've added value [to the company]."

One of the best jobs she says she's had involved running Union Pacific Distribution Services from 2006 to 2010. The subsidiary made it easier for companies without direct rail access to use rail service.

"It was a great opportunity. It was interesting and I enjoyed it," Whited says.

During the early years of her UP career, Whited was often the only woman in the room. Today, she aspires to ensure that scenario ends with her generation. She was a founding member and is former president of UP's female employee resource group, which was established to help support women in their careers at UP.

As part of her ESG oversight, Whited also has pushed UP to set targets aimed at increasing the percentage of women and minorities who make up its workforce.

"I believe that what gets measured gets worked on," Whited says. "If you don’t have targets, everybody can say we are working on that. But when you say, 'Double that representation of women in the workforce,' that creates an impetus for change.”

Whited also wants to ensure that diversity works its way up into UP's management and executive ranks.

So, what still remains on Whited's radar? It's all about developing people at UP, she believes.

"I want to see people who are just entering their careers reach their full potential," Whited says. "That's where I think I can create a lot of value: Helping people get to where they want to go."