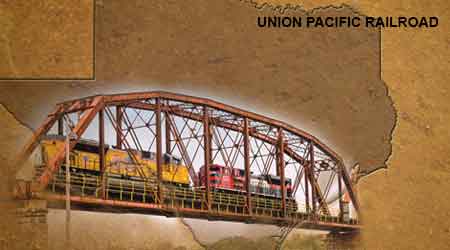 Cross–border traffic into and out of Mexico currently generates about 10 percent of UP's annual volume.

There are 12 millions cows in Texas, which leads the nation in herded cattle. There's something else roaming the state in large numbers, too: trucks.

Texas tops the United States in the volume of freight trucked to and from Mexico, where manufacturing is booming. A microcosm of the state's massive truck traffic is evident along Interstate 35 at the U.S./Mexico border in Laredo. Each day, about 12,000 trucks cross the border, mostly via two bridges dedicated to commercial traffic.

The Laredo crossing is the busiest for trucks entering the United States, and the Port of Laredo is the largest inland port along the border, home to more than 500 freight forwarders, 200 trucking companies and 100 U.S. customs brokers.

The crossing is a busy one for rail, as well, especially for Union Pacific Railroad. The Class I serves the area's international rail bridge and operates a nearby intermodal terminal that's overstuffed at 180 percent of capacity. The only railroad that serves all six major gateways along the border, UP also taps a heavily truck-used Texas crossing in Eagle Pass, and two others in Brownsville and El Paso.

With so many trucks traversing the region, the Class I is on a mission to divert more of them to rail. It's a crucial pursuit, given UP's revenue and traffic last year declined 9 percent and 6 percent, respectively, compared with 2014 results. To seize what's become a golden opportunity, the railroad aims to better position its network and resources in the state to take on additional traffic, such as a bigger flow of consumer goods and auto parts.

Texas already is a major cog in UP's 23-state network, home to about one-sixth of the railroad’s 47,000 employees and one-fifth of its 32,000 track miles. The railroad originates or terminates nearly 2.8 million carloads in Texas annually, or about 30 percent of yearly volume. 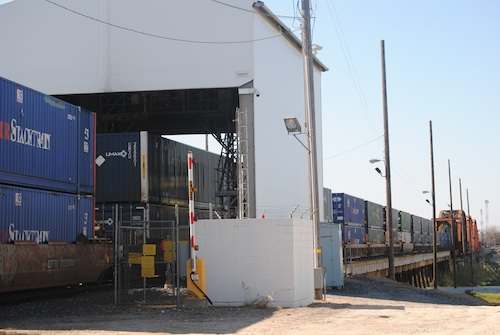 UP also devotes a lot of dollars to its operations there. On an annual basis, its payroll exceeds $750 million, in-state purchases total $2.6 billion and capital investment approaches $1 billion. The railroad last year allocated $800 million in capital to Texas — the most allotted to any state — after spending $623 million in 2014. From 2010 to 2015, UP spent $3.6 billion to bolster infrastructure in the state.

Ultimately, hardening infrastructure and expanding capacity is vital to achieving the truck diversion goal. New and expanded facilities coupled with doubled and upgraded track also will help the railroad build traffic in other key segments, UP executives say.

The Class I serves 12 ports and taps a large chemical market and oil/gas industry in Texas. In addition, the railroad hauls a lot of rock and aggregates, a traffic sector that figures to gain a boost from increased highway construction funded by the Fixing America’s Surface Transportation Act.

Banking on the border

But cross-border traffic is the primary business-growth target. That critical segment generates about 10 percent of UP’s total annual volume — a percentage UP execs are convinced will ratchet up over the next several years.

"We are very bullish on Mexico in general in the long term," said UP Chairman, President and Chief Executive Officer Lance Fritz during an earnings conference held Jan. 21. "It's a vibrant economy, it has got a vibrant middle class, and our access to the six primary rail gateways to and from Mexico give us a real great opportunity to participate in that economy."

Cross-border traffic is expected to grow in part because Mexico’s manufacturing output is accelerating. The Manufacturers Alliance for Productivity and Innovation (MAPI) expects output to grow more than 3 percent in 2016.

Automotive production is exploding as low interest rates and gasoline prices entice buyers, and industrial production is booming as consumer demand mounts and a near-sourcing trend — which is drawing more raw material suppliers to south Texas — continues to gain steam.

Mexico will be Latin America’s manufacturing growth leader for the foreseeable future, according to a MAPI report issued late last year.

"Mexico is tied with Canada as the second-largest importer to the U.S. after China, and Mexico is becoming second," says Bernardo Ayala, UP's vice president of Mexico markets. "Economic integration is very strong there. Mexico is doing a good job of continuing to attract foreign investment."

Texas transportation leaders expect the healthy cross-border activity and the state’s explosive population growth to drive a freight volume ramp-up over the next two decades. A freight mobility plan drafted late last year by the Texas Department of Transportation predicts that by 2040, freight moving in the state will nearly double to 3.75 billion tons while cross-border cargo will skyrocket 196 percent.

The plan prompted the Texas Freight Advisory Committee to warn that such an extreme increase could worsen the state’s already congested highway system, meaning alternative modes — such as rail — will become more important to ensure economic competitiveness. That's music to UP execs' ears.

"The state knows a massive amount of freight is coming, and that rail is a key part to their future," says Brenda Mainwaring, vice president of public affairs for UP's Southern Region. "We see the same drivers as the state. Texas is huge part of our franchise, and we operate it that way."

To accommodate current freight demand and prep for the heavy volume to come, UP aims to keep adding capacity and upgrading infrastructure throughout the state.

"Texas is a business-friendly state, and has been for a long time," says UP Senior Vice President of Corporate Relations Scott Moore. "We will continue to make investments in the state as business dictates."

Growing business with a large beer and wine producer/marketer dictated the need for UP to construct the Kinney County Railport, which was completed late last year in Spofford near the Eagle Pass crossing.

The $40 million box-car cleaning, washing and repair facility provides a pipeline of cars for customers that ship millions of cases of beer annually, helping to improve operational efficiency and network fluidity, says UP Director of Public Affairs Ivan Jaime.

Workers at the railport — which launched operations Jan. 4 — clean and prepare box cars to meet food-grade guidelines. That way, cars arrive quicker and are ready to be loaded by beer customers in Mexico, then returned to the United States for distribution.

The major customer served by the facility is Constellation Brands Inc., which is spending $2 billion to expand its brewery and glass bottle production plants in Nava, Coahuila, Mexico, about 50 miles from the railport. When the brewery expansion is completed by 2017’s end, the company expects to boost production capacity from 10 million to 25 million hectoliters.

The plant produces such beer brands as Corona Extra, Corona Light and Modelo Especial, which are imported to the United States. 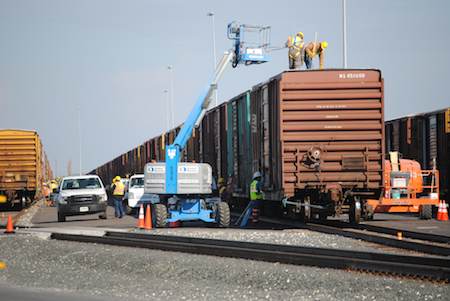 The railport — the only dedicated food-grade car cleaning facility in UP’s network, says Mainwaring — now provides Constellation Brands about 90 50-foot box cars per day to meet the current need. The railport is designed to handle 240 cars per day.

From autos to avocados

As it flows in from Mexico in large volumes, beer continues to be a growing business line for UP, says Ayala. So are certain imported perishable items, such as avocados and limes.

UP also anticipates a business boost from Mexico's energy reform, which has opened the sector to private investment, and poses potential for oil and fuel oil imports, says Ayala.

In addition, the structure of power generation that was controlled by the Mexican government is changing, with a conversion to natural gas, he says.

But the most promising cross-border opportunity is the automotive sector. In 2015, vehicle exports had reached a record 2.9 million units, about 70 percent of which were exported to the United States, the Mexican Automobile Industry Association estimates. Auto production will exceed 4 million units by 2017, the association projects.

"We expect production to grow to 5 million units in the 2018-19 timeframe," says Ayala, adding that UP works with all major automakers, including Toyota, Kia, GM, Ford, Nissan and Infinity.

At the border, UP interchanges auto shipments with either Ferromex or Kansas City Southern de Mexico S.A. de C.V., which serve the plants.

At the same time, other containerized cargo coming into the United States — such as refrigerators, washing machines and flat screen TVs — has boosted UP's intermodal fortunes, says Ayala.

"It's been a growing intermodal sector, especially products for the U.S. consumption market," he says.

But the mounting wave of consumer products has been both a boon and a strain for the Port Laredo intermodal terminal. With so much volume pouring into the facility — especially from Mexico — it's bursting at the seams.

"It's the only intermodal terminal on the border in Texas," says Mainwaring, adding that the facility handles autos and auto parts, grain, beer, food products and other consumer goods.

Time for a bigger terminal

Enter a $90 million project designed to greatly improve and expand the terminal. UP has divided the project into two phases.

Launched last year, the first phase involves massive sitework to prepare more than 37 acres for the facility’s larger footprint. That work was completed recently. The phase also includes the construction of an automated, state-of-the-art entrance that will accommodate 24/7 operations. The railroad expects to complete the entrance later this year.

The second phase calls for doubling the terminal’s size to handle more truckloads. UP has not yet determined a start date for the phase, which will involve trackwork and expanded parking areas.

A date to start a planned expansion at the San Antonio Intermodal Terminal (SAIT) hasn’t been scheduled yet, either. Projected to begin over the next several years, the work calls for building additional track to handle longer trains — stretching 8,000 or 9,000 feet — and creating more parking spaces.

The more than 300-acre SAIT performs about 190,000 lifts per year and is designed to handle 250,000 lifts annually at full build out. Opened in late 2008, the facility serves San Antonio, Austin, Eagle Pass and Laredo, as well as the entire south Texas market. The terminal is located within 200 miles of the border and hundreds of Mexican factories.

UP also hasn’t set a construction start date for another key project: a huge classification yard in Hearne. The railroad more than a year ago announced its intent to build what will become one of its biggest classification yards.

The site was chosen for the facility because of the populations and metroplexes in the region, says Moore. Seven UP lines converge in the area, connecting markets in Dallas/Fort Worth, Houston, Austin and San Antonio, as well as other points in east Texas and the Gulf Coast. Work might not necessarily start in 2016, he says.

Meanwhile, the railroad continues to build, upgrade and tap other infrastructure in the state. In August 2015, UP relocated its Brownsville border crossing from the Brownsville and Matamoros bridge to the new West Rail International Bridge across the Rio Grande River, about 15 miles downstream.

The first new international rail crossing between the United States and Mexico since 1910, the bridge provides a more efficient route, eliminating more than half a dozen grade crossings in downtown Brownsville. Additionally, a new customs facility was established by the bridge to ensure a smoother transition for the movement of goods, UP execs say.

Crews also began laying 38 miles of double track in the Glidden Subdivision on the west side of Houston to accommodate growing traffic into and out of the city. When the project is completed in April, the new double track will increase operational efficiency, UP execs say.

So, it isn’t a matter of hoping enough business will be there once UP puts the necessary infrastructure in place. It’s more about ensuring the railroad is prepared to divert more of the multiplying cargo from highway to rail.

It helps that parties in the United States and Mexico are working well together in the manufacturing realm, says Ayala. That's an impetus behind Texas' freight explosion, he believes.

"The most exciting thing is the integration of both countries," says Ayala.