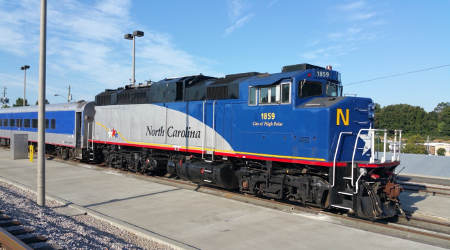 The U.S. Environmental Protection Agency (EPA) has certified an emissions-reduction system for one of the North Carolina Department of Transportation's (NCDOT) passenger locomotives.

Known as a blended after-treatment system (BATS), the technology uses catalytic reduction to chemically remove diesel engine emission pollutants from the locomotive's exhaust before it's released into the air.

In particular, the system is designed to reduce four diesel exhaust pollutants: nitrogen oxides, carbon monoxide, hydrocarbons and particulate matter. The EPA has determined that all four can cause chronic negative health effects, such as heart and lung disease, NCDOT officials said in a press release.

NCDOT is the first rail agency in the United States to demonstrate the technology on an in-service passenger locomotive, department officials said.

"This is another positive step in our ongoing efforts to be a leader in helping reduce air-pollution levels across the state," said NCDOT Rail Division Acting Director Charles Edwards.

The EPA certification will enable NCDOT to pursue state and federal grant opportunities to retrofit BATS onto its full fleet of locomotives. Rolling out the technology onto the entire fleet could help cut air pollution along the Piedmont route between Raleigh and Charlotte, NCDOT officials said.