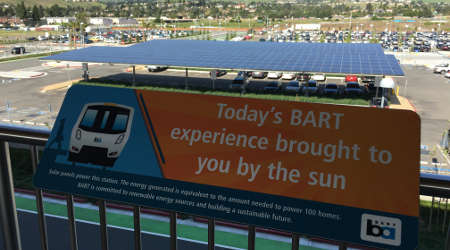 Bay Area Rapid Transit's (BART) board has approved a new "wholesale electricity portfolio policy" that requires the agency to use more renewable energy.

In particular, the policy mandates that BART have an electricity portfolio composed of at least 50 percent renewable sources. By 2025, 90 percent of the agency's electricity usage must come from low- and zero-carbon sources.

And by 2035, BART is aiming to use only zero-carbon sources of energy, agency officials said in a press release.

Furthermore, the policy requires that BART use only eligible renewable sources of energy by 2045.

"Given that renewable energy supply costs have fallen significantly in recent years and have approached cost parity with other supply sources, BART has an opportunity to set clean energy goals that are both ambitious and realistic," said Holly Gordon, BART's sustainability manager.

Although most transit agencies need to buy power from their local provider, BART has "wide latitude in choosing its power sources" as a result of state legislation approved in 2015, BART officials said.

BART uses about 400,000 megawatt hours of electricity annually. That's slightly more than the power used by the city of Alameda, Calif., which makes BART one of the largest power users in Northern California, agency officials said.