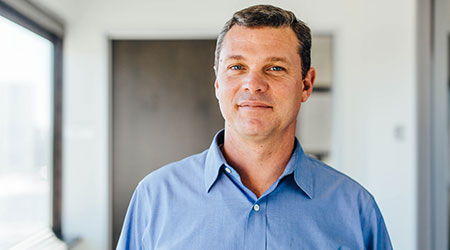 The Association of American Railroads (AAR) has named Gary Van Tassel II of CSX as the winner of the 2019 John H. Chafee Environmental Excellence Award.

The award is named in honor of the late Rhode Island senator who was a strong advocate for sustainability and rail's environmental benefits. The Chafee award recognizes a railroad employee who has "demonstrated the highest level of environmental stewardship in the previous year," according to an AAR press release.

Van Tassel led a team that focused on making a traditional intermodal facility more efficient by implementing new technology and modernizing site layouts so that the railroad could operate with a smaller footprint. That includes using fewer diesel utility trucks, transitioning to electrified cranes and significantly reducing truck dwell times.

In the past year, Van Tassel and his team focused on adapting those concepts to modernize smaller terminals that do not use large rail-mounted gantry cranes. By optimizing for minimal movements, Van Tassel changed the operating concept of the terminal to reduce container handling and truck congestion, AAR officials said.

"As the industry continues to modernize, it’s important to recognize our colleagues in the industry for their outstanding dedication to developing sustainable initiatives," said AAR President and Chief Executive Officer Ian Jefferies. "Railroads continue to lead the way when it comes to sustainability in the transportation sector and we have these men and women to thank for their efforts."

The following also were nominated for this year's Chafee award:
• Sheila Dougherty of Kansas City Southern, who spearheaded sustainable practices for employees and enhanced the corporate culture of sustainability;
• Mike McAndrews of Union Pacific Railroad, who completed energy-conservation projects that have helped significantly reduce the company's carbon footprint and resulted in over $1 million per year in total utility savings;
• Iz Salazar of BNSF Railway Co., who created an environmental checklist tailored for the railroad's homeless initiative; and
• Alison Simon of Amtrak, who designed onboard hydration stations to reduce plastic bottle use, increased receptacle locations and reduced single-use packaging on new Acela trains.