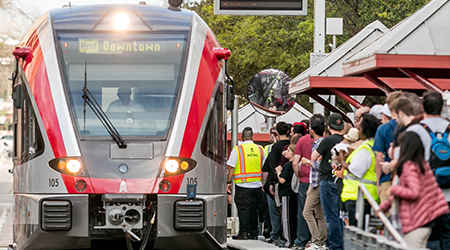 Among Cap Metro's achievements, the agency reduced energy use by 13.4 percent between 2012 and 2016. Cap Metro reduced costs and saved energy by converting outdoor lighting to LEDs and upgrading air conditioning in buildings to more efficient systems, APTA officials said in a press release.

Meanwhile, Valley Metro uses solar energy to power its rail operations and maintenance center and one of its bus facilities. In the past three years, greenhouse gas emissions at the rail center have been reduced by 3,000 tons and cut energy costs by $230,000, according to APTA.

For its part, HART is constructing the first large-scale driverless rail system in the United States with a sustainability approach that builds on the Native Hawaiian host culture. The agency also convened elders and scholars from the Native Hawaiian community to develop culturally appropriate station names.

APTA rolled out its Sustainability Commitment in 2009, and 146 transit agencies and businesses have signed on to the program.