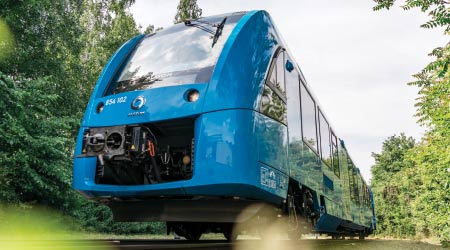 For nearly a century, railroads have relied on diesel-powered locomotives to haul goods and people long distances. But as concerns mount about greenhouse gas emissions and the rising cost of diesel, rail researchers are exploring alternatives.

“It’s zero-emission technology,” Hoffrichter says of the locomotives, which also are known as “hydrail” units. “It means we’re no longer reliant on a particular fuel source. If that source has price volatility, you can switch to another.”

The only by-products of deploying hydrogen fuel cells? Water and heat. Plus, hydrogen-powered systems could be used in hybrid systems that combine batteries, fuel cells, wayside electrification and other fuel sources, said Nick Little, MSU’s director of railway education, in an email.

Hoffrichter is working with passenger and freight railroads on hydrail research, although he declined to identify the roads.

“There has been quite a lot of interest, not just in North America, but globally,” he adds.

Earlier this year, for instance, Alstom’s Coradia iLint hydrogen-powered train entered commercial service in Germany. The unit is powered by a hydrogen fuel cell that produces electrical power for traction, and it produces no emissions, Alstom officials say.

In Toronto, GO Transit has explored hydrogen-powered trains as part of its massive GO Regional Express Rail program, which includes a plan to electrify the region’s commuter-rail system.

While hydrail and battery-powered trains hold promise in the passenger-rail realm, they may not work quite as well for freight railroads.

“For a freight application, [battery-powered technology] is a bit more problematic because you don’t know exactly where trains will stop every time in a yard,” Hoffrichter explains.