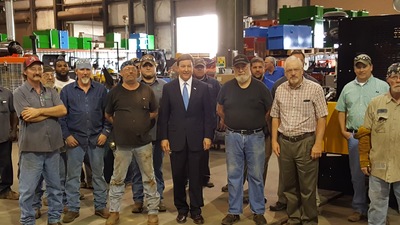 Watco Cos. LLC was joined by U.S. Sen. Mike Crapo (R-Idaho) and local officials in Burley, Idaho, last week to announce a major expansion of rail shipment and storage facilities.

Watco purchased the former Keystone RV manufacturing plant and will use the 156,000-square-foot facility to establish a new warehouse and distribution facility, according to a Watco press release.

Watco officials estimate the company may increase by five times the short-line shipping of commodities in the immediate region through efficient use of climate-controlled facilities and faster rail-loading facilities, according to the press release. Another 100 acres around the project may house future businesses related to rail shipping.

The project is being established among Watco Cos., Union Pacific Railroad, other Class I operations and Idaho producers and commodity distributors.

Crapo helped pass federal tax incentive legislation that is credited in part for the rail expansion project, Watco officials said. Crapo is now working with U.S. Sen. Ron Wyden (D-Oregon) and others to make the 45G short-line tax credit permanent under federal tax law. The proposed Building Rail Access for Customers and the Economy (BRACE) Act is one of the most co-sponsored bills in the Senate.

"Investments in rail infrastructure allow us to connect Idaho farmers to east coast consumers of Idaho products and the 45G Tax Credit certainty helps with those investments," said Ed McKechnie, Watco's executive vice president for global strategy. "Sen. Crapo has been a terrific leader for Idaho agriculture and transportation needs and we appreciate his leadership."

Rogers focused his remarks on encouraging economic development in Alabama, ensuring awareness and safety at grade crossings and the need for a strong, efficient, and safe freight rail system to connect Alabama's agricultural and energy producers to the global market.

"We must do all we can in Washington to ensure our small and medium sized businesses succeed," said Rogers in a press release prepared by REMSA.

The project, which was funded in part by a federal Transportation Investment Generating Economic Recovery (TIGER) VII grant, will improve the NECR line to accommodate modern freight-rail carloads up to 286,000 pounds. Currently, the rail line can accommodate carloads of up to 263,000 pounds. The work will include upgrading the existing line with 7.5 miles of new continuous-welded rail, 15,000 new crossties and 15,000 tons of ballast.

NECR is a subsidiary of Genesee & Wyoming Inc.