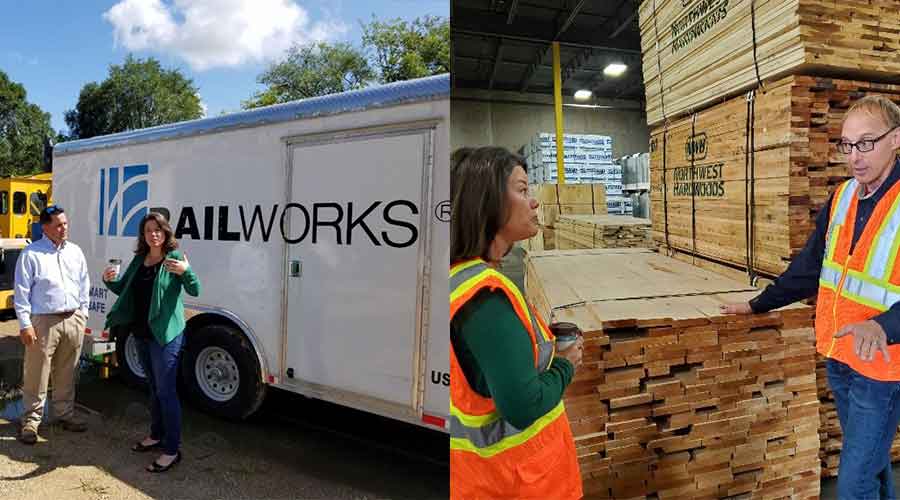 Craig, who was first elected to Congress in 2018, serves on the House Transportation and Infrastructure Committee and its subcommittee on railroads, pipelines and hazardous materials.

Craig met with company executives and rail industry representatives at RailWorks Corp., where she learned about the company's business operations and ongoing rail projects in the state. Her visit was coordinated by the Railway Engineering-Maintenance Suppliers Association (REMSA), of which RailWorks is a member.

"Railroads are a critical part of our state's infrastructure — they help power our economy and connect Minnesotans to other regions of the United States," said Craig in a press release issued by REMSA.

Craig also visited Progressive Rail Inc. in Lakeville for a tour and public policy discussion. The tour was led by Progressive Rail owner Dave Fellon and Chief Operations Officer Layne Leitner. In addition to touring the facilities, Craig took a short ride on a locomotive.

The public policy discussion covered the challenge that short lines face in finding sufficient funds to maintain rail infrastructure. Progressive Rail representatives advocated for short-line infrastructure tax credit known as 45G; the Building Rail Access for Customers and the Economy Act, which would extend the tax credit; and the need for increased funding for the Better Utilizing Investment to Leverage Development (BUILD), and the Consolidated Rail Infrastructure and Safety Improvements (CRISI) grant programs as part of the fiscal-year 2020 appropriations package.

“Our company is dedicated to serving our many customers and the 45G tax credit plays a key role in the long-term and safe operation of Progressive Rail Inc. We thank Congresswoman Craig for her early and ongoing support for 45G and the short line industry overall," said Fellon in a press release issued on behalf of the American Short Line and Regional Railroad Association, of which Progressive Rail is a member.