The Greenbrier Cos. Inc. announced the opening of the GBSummit rail-car axle machining facility in San Bernardino, Calif. Jointly owned by Greenbrier and Sumitomo Corp. of America, the 80,000-square-foot facility will provide comprehensive axle services, including cleaning, finishing, machining and downsizing. The GBSummit shop is adjacent to an established Greenbrier Rail Services-owned rail-car wheel/axle maintenance facility. Using an automated manufacturing process, the new facility has the capacity to produce up to 12,000 axles per year. Over the next 36 months, GBSummit will grow its axle production to 50,000 axles annually.

ITS Technologies & Logistics LLC has purchased certain rail terminal assets of Worldwide Distribution Services (WDS), an intermodal services company based in Cleveland. ITS now assumes the operation of five Norfolk Southern Railway intermodal terminals previously operated by WDS. Two of the terminals are in Cincinnati, while another two are in Louisville, Ky. The remaining terminal is in Greensboro, N.C. The five terminals are a "perfect fit" for ITS Technologies & Logistics' overall growth strategy, said Chief Executive Officer Steve Rubin in a press release. The company now operates more than 50 rail terminals in the United States and Mexico. 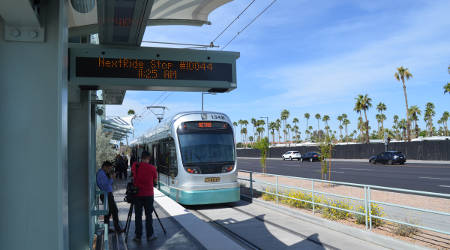 Sundt Construction Inc. and Stacy and Witbeck Inc. earned a 2016 Arizona Transportation Partnering Excellence award for their partnership on Valley Metro's Northwest light-rail extension. The companies completed the 3.2-mile extension in March 2016, three months ahead of schedule and within budget, Sundt officials said in a press release. The firms also coordinated more than 20 months of utility construction to remove and replace water, sewer and storm systems. In addition, to keep community members informed, the team developed a smartphone app to provide project updates and information about changing traffic control.

The Railway Supply Institute (RSI) is seeking nominations for board members to serve three-year terms starting in January 2018. Nominees must be from an RSI member company "in good standing," officials from the institute said in a press release. Individuals are allowed to nominate themselves. Nominations are due by May 31. At RSI's annual membership meeting in September, the RSI board will present a slate of candidates to the full RSI membership for ratification. The meeting will be held in conjunction with Railway Interchange 2017 in Indianapolis.

Trinity Industries Inc. reported first-quarter net income of $46 million, or 30 cents per common diluted share, compared to $97.2 million, or 64 cents a share, for the same period last year. The company's 1Q 2017 revenue was $877.3 million versus $1.2 billion in 2016. As of March 31, Trinity's Rail Group had a backlog of $2.7 billion, which represented 26,420 rail cars. The company's quarterly performance was in line with expectations, said Trinity Chairman, CEO and President Timothy Wallace in a press release. In addition, results from Trinity's rail and inland barge groups reflected "substantial declines in production volumes" compared to last year as the groups continued to face challenging market conditions, Wallace added.

WSP Parsons Brinckerhoff has named Thomas Gibson regional manager of the company's transit and rail practice in Sacramento, Calif. In the role, Gibson will be responsible for technical and operational management, project delivery, staff acquisition and growth of the firm's transit and rail business. He has 37 years of experience in rail systems projects throughout the United States and internationally, including the implementation of systems and trackwork for a light-rail extension in St. Louis. Before joining WSP Parsons Brinckerhoff, Gibson was the national leader for rail systems for another consulting firm. 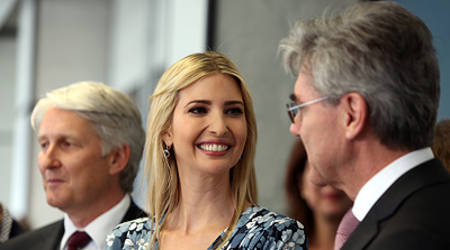 President Donald Trump's daughter Ivanka Trump earlier this week visited Siemens' training center in Berlin. Siemens AG President and Chief Executive Officer Joe Kaeser accompanied her on the tour of the facility, which offers "two-track programs" in a range of commercial and technical fields. The programs, which combine theory and practice, are available in Germany, the United States, Canada, Mexico, South Africa, India and the United Kingdom. Areas of study include mechatronics, information technology, electronics and technical product design. Worldwide, more than 12,000 people are enrolled in training or two-track programs at Siemens. Before her visit, Ivanka Trump last month hosted with German Chancellor Angela Merkel a roundtable discussion on vocational education and workforce development.