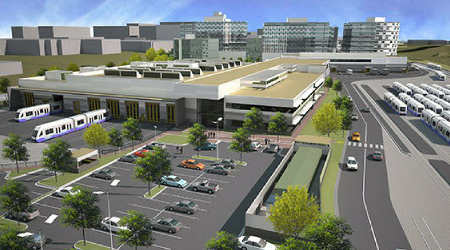 American Railcar Industries Inc. (ARI) reported third-quarter 2017 net income of $8.9 million, or 46 cents a share, compared with $7.7 million, or 40 cents a share, in the same period in 2016. Total revenue for the quarter fell 17 percent to $120.7 million versus $145 million last year. The drop resulted from decreased revenue in the manufacturing segment, partially offset by increased revenue in the rail-car leasing and services segments. During 2017's third quarter, ARI shipped 618 rail cars for direct sale and 338 rail cars for lease versus 855 units for direct sale and 322 cars for lease during the same period last year.

HNTB Corp. Mid-Atlantic Division President and Transit/Rail Practice Leader Diana Mendes has been named chair of the American Public Transportation Association's (APTA) legislative and executive committees. Her election marks the first time in APTA's 135-year history that the chair of the legislative committee is from a private-sector firm, HNTB officials said in a press release. The legislative committee develops recommendations about federal legislation related to transit. The executive committee is composed of individuals elected by APTA members to act on behalf of the association's full board when it's not in session.

George Apostolou has joined Lewis Bolt & Nut Co. as senior manager, sales. He oversees business with Class Is, as well as export sales. Apostolou previously served as sales representative and manager at Omega Industries Inc., where he began working in 1996, according to his LinkedIn profile.

PTSI Transportation Senior Adviser Michael Perlman died in July at his San Mateo, California, home. He was 79. Perlman followed his father's footsteps into railroading, becoming a planning officer and later operating officer of the Chicago, Burlington and Quincy Railroad. He continued to work for the railroad after it merged with the Burlington Northern Railroad. Perlman later left Burlington Northern and began performing consulting services, including a study for a congressional committee on alternate routes to separate freight and passenger traffic on key corridors, PTSI officials said in a statement. Perlman is survived by his youngest sister.