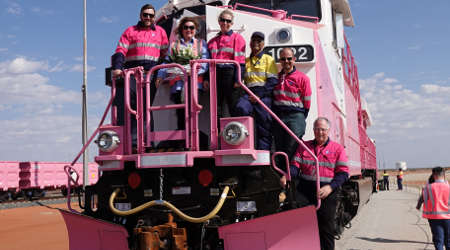 CIT Group Inc. has completed the sale of its European rail leasing business NACCO for net proceeds of $1.1 billion. The company's Paris-based operations and assets, including 11,000 rail cars, were sold to VTG Aktiengesellschaft in Germany, while its operations and assets in Germany and Luxembourg were sold to a consortium of buyers consisting of WASCOSA AG and a subsidiary of Aves One AG. A portion of the proceeds will be used to "optimize CIT's funding profile," including redeeming rail-car securitization in the United States, terminating the total return swap facility and repaying outstanding unsecured debt, company officials said in a press release.

Michael Baker International has hired Brad Thoburn as vice president and Southeast regional transit and surface transportation planning lead. He is responsible for the development and management of the region's transit and planning business plan and growth. Thoburn has more than 25 years of experience in public administration, including 18 years in senior management roles in transportation, transit, planning and public policy. Most recently, he was vice president of planning and development at the Jacksonville Transportation Authority in Florida.

WAGO has named Edward Naczek product manager for its DIN Rail Mount Terminal Blocks. He previously was application and product sales engineer and marketer for Storage Battery Systems LLC. In that role, he was responsible for developing, attaining and bringing to market motive power/forklift cell technology, warehouse power carts, lithium battery packs and other products.