Gordon Webster, a project engineer at Fritz-Rumer Cooke, led the tour. The company designed and is constructing more than 11,000 feet of track to serve the cooperative's new Ag Campus and Research Farm.

Founded in 1879, the Heritage Cooperative is member-owned and serves more than 3,500 farmer members and more than 4,000 rural and urban customers. 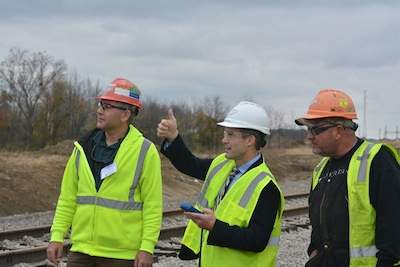 Jim Jordan (center) gives the thumbs up to drop ballast to form a trackbed.
Photo: National Railroad Construction & Maintenance Association
The majority of the track consists of a 1.24-mile loop to handle 90-car unit trains, and is one of only two such loop tracks in Ohio at an agricultural complex, according to a press release from the National Railroad Construction & Maintenance Association (NRC), of which Fritz-Rumer Cooke is a member.

The track design avoided all wetlands on the project and includes a wye connection with CSX Transportation's mainline. This kind of connection allows trains to enter and exit the facility in either direction, which is supposed to reduce delays at nearby road crossings.

The cooperative's new facility will include an express unit grain terminal and a 30,000-ton dry fertilizer warehouse. These commodities can be shipped and received by rail, NRC officials said.

"I always say that [Ohio's] 4th District grows things and makes things," Jordan said. "Fritz-Rumer Cooke has played a big part in that, serving as an employer and manufacturer in Ohio for over 100 years, and now employing folks in our district to continue improving and advancing the railroad industry. I’m proud of the work they are doing in Marysville, and look forward to seeing the project at its completion."

During his Oct. 28 visit, Foxx received an overview and several briefings about RTD's Workforce Initiative Now (WIN) program, which is aimed at recruiting, training and placing skilled transportation workers in the job market.

Founded in 2011, WIN has served more than 1,350 individuals through general career outreach and planning to date.

Program participants come from a variety of background and land jobs ranging from construction on FasTracks projects to the operation of RTD's new commuter trains.

"Denver is setting an international standard for how to complete major transit projects through public-private partnerships," said RTD Interim General Manager and CEO David Genova. "Arm-in-arm with that is our WIN program, which is dedicated to preparing the skilled labor our industry needs now and will need over the long run."

In August, WIN received a federal workforce development grant worth nearly $700,000 to expand and build on the program as a model for other U.S. public transit agencies.