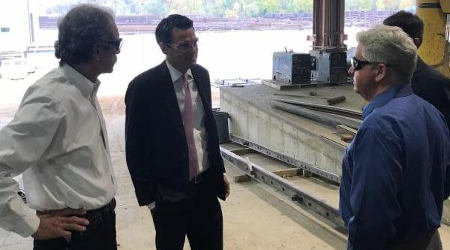 He joined representatives from the National Railroad Construction & Maintenance Association (NRC) and the Railway Engineering-Maintenance Suppliers Association (REMSA). A&K is a member company of both associations.

The company's Kansas City facility is the center of its operations and home to most of its 300 employees. The ISO-certified plant is a complete trackwork manufacturing facility.

During the visit, Yoder spoke about "the need for infrastructure investments and pro-business economic policies," NRC officials said in a press release.

Yoder is a co-sponsor of the Building Rail Access for Customers and the Economy (BRACE) Act, which would make permanent a tax credit to short-line and regional railroads for making infrastructure upgrades.

Courtney in 2014 helped secure an $8.2 million Transportation Investment Generating Economic Recovery (TIGER) grant to upgrade the rail line and double its current cargo capacity. The project also is expected to "significantly" increase the commercial value of the Port of New London, according to a press release issued by Courtney's office.

"Expanding freight-rail capacity will help grow the Port of New London, which has been vastly underutilized as a commercial shipping hub," Courtney said. "Once this project is finished, it will be a game-changer for eastern Connecticut."

Expected to cost $12.8 million, the project calls for upgrading the rail line to handle new freight-car shipments weighing up to 286,000 pounds. The project also includes upgrading the line with new continuous welded rails, crossties and ballast.