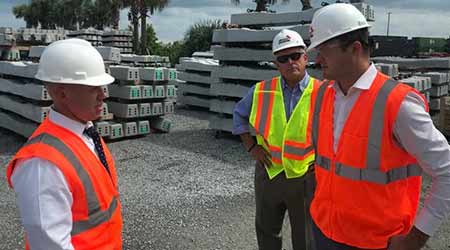 Barr visited R. J. Corman's headquarters in Nicholasville, Kentucky, on Oct. 19. The company's rail group serves all seven North American Class Is, many regionals and short lines, and dozens of industries that use rail.

During his visit, Barr participated in a policy discussion that touched on the need for a federal infrastructure bill. Attendees also discussed their concerns over government regulation, including the Federal Railroad Administration's (FRA) proposed Part 243 rule, "which would hurt the railroad contractor business," according to a press release issued by the National Railroad Construction & Maintenance Association (NRC).

Tour participants also thanked Barr for his support as a co-sponsor of the Building Rail Access for Customers and the Economy (BRACE) Act, which would permanently extend the short-line tax credit.

Also on Oct. 19, Stella-Jones Corp. hosted Kind for a tour of its tie plant in Bangor, Wisconsin. The congressman also participated in a policy discussion on the topic of truck size and weight limits. Stella-Jones members thanked Kind for his support as a co-sponsor of the BRACE Act.

Also earlier this month, Mast joined NRC member Vossloh North America and other transportation stakeholders for a tour and policy discussion at the company's Rocla Concrete Tie Inc. production plant in Fort Pierce, Florida. The facility produces more than 700 concrete ties each day for numerous railroads in the state, according to an NRC press release.

Attendees discussed with Mast their concerns over the FRA Part 243 rule; maintaining current truck weight and size limits; and their support for the BRACE Act.