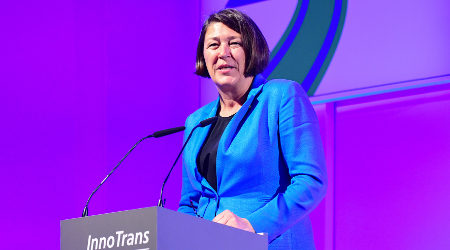 The event featured record exhibitor numbers, a total attendance of 161,157 visitors and an increase in business volume, InnoTrans officials said in a press release.

"This year's InnoTrans once again impressively showed that it is the ideal platform for presenting forward-looking innovations, combined with an enormous international appeal," said Christian Goke, chief executive officer of Messe Berlin, which organizes the conference. "No other event offers trade visitors such a comprehensive and global insight into every part of the industry’s value chain."

About 12,000 people visited the displays when InnoTrans opened its exhibits to the general public during two days of the conference.

Numerous exhibitors made use of the rail track and outdoor display areas. Of particular interest was the new Series 484 light-rail trains for Berlin's S-Bahn, which are due to begin service in 2021, conference planners said. A consortium formed by Siemens and Stadler are manufacturing the rolling stock.

Other events that occurred over the four days:
• GE Transportation reported signing a contract with Kazakhstan Temir Zholy (KTZ) to supply 300 shunting locomotives;
• Siemens Mobility and Deutsche Bahn agreed to work together to implement new ideas about rail travel; and
• Volker Schenk, president of the German Railway Industry Association, and Zhou Xiaoqin, executive vice president of the China Association of Metros, signed a declaration of intent on "Sino-German cooperation in urban rail transport." The declaration calls for coordinating the planning, construction and standardization of transit-rail vehicles.