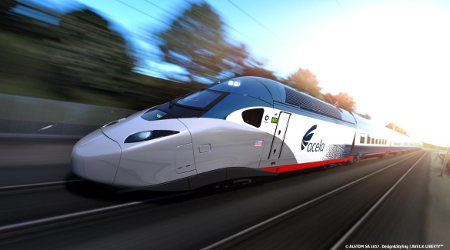 Alstom and Merrill Technologies Group announced the completion of the first power car bodyshell for the Avelia Liberty trainsets that will operate on Amtrak's Northeast Corridor. At its facility in Alma, Michigan, Merrill is manufacturing 56 bodyshells for Alstom. In the coming weeks, the first bodyshell will arrive at Alstom's passenger rolling stock center in Hornell, New York, where the company will complete manufacturing of the power cars, according to a press release. The power car bodyshells are made from U.S. steel. In 2016, Alstom and Amtrak announced a contract for 28 next-generation Avelia Liberty trainsets. The agreement included long-term technical support and spare components and parts for the units' long-term maintenance.

Bombardier Transportation this week unveiled a new battery-operated train in Berlin, Germany. The Bombardier Talent 3 electro-hybrid train is 50 percent quieter than modern diesel trains and doesn't generate exhaust, Bombardier officials said in a press release. The new battery-powered train is the first of its kind to enter passenger operation in Europe in more than six decades, according to the company. The unit is equipped with four Bombardier Mitrac traction batteries and can cover distances of 25 miles. In 2019, Deutsche Bahn will start a year-long passenger-service trial with the current prototype in the Alb-Lake Constance region.

Illinois Gov. Bruce Rauner on Wednesday visited Harting's booth at the International Manufacturing Technology Show in Chicago. During the visit, Harting President and CEO Jon DeSouza demonstrated the company's three Modular Industry Computing Architecture (MICA) Industrial Internet of Things (IIoT) kits. The products are designed to make it "easy and economical" for businesses to incorporate IIoT concepts into their operations, according to a company press release. In April, Rauner visited Harting's global headquarters in Espelkamp, Germany.