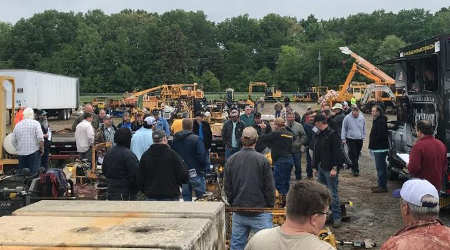 The National Railroad Construction & Maintenance Association (NRC) auctioned off 367 pieces of equipment for a total $1.15 million at NRC's annual equipment auction held last month in Lonoke, Arkansas. The association raised a record $72,027 for its safety and education program, which receives a percentage of the value of all consignments from contractors, suppliers and railroads. The program also nets all proceeds from items donated to the auction. Equipment sold this year ranged from tampers and grapple trucks to tie inserters, spikers and ballast regulators.

The San Bernardino County Transportation Authority has chosen Lockwood, Andrews & Newnam Inc. to manage construction of a new storage and maintenance facility for the Redlands passenger-rail project. The 15,000-square-foot facility and storage tracks will accommodate six diesel multiple units at a time, and will be equipped with an inspection pit, pedestal and maintenance tracks with portable jacking pads. As construction management consultant, LAN will provide schedule evaluation, construction project advertising, bid analysis and award, construction inspection, materials testing and inspection, contractor interface, and contract administration services, according to a company press release. The financial value of LAN's contract wasn't disclosed. The 9-mile project crosses through the cities of San Bernardino and Redlands, California.

Mitsui Rail Capital Europe has ordered 25 Vectron locomotives from Siemens. The first 10 units, which are slated to be delivered by year's end, will be used on routes between the Netherlands and Southeast Europe. Another 10 units are planned for service on the Rhine-Alps corridor and are expected to be delivered in 2019's second half. The remaining five units, which will be equipped as direct-current locomotives for exclusive operations in Italy, are slated for delivery in March 2019, according to a Siemens press release. Financial details of the order were not disclosed.

AECOM has appointed Alanna Strohecker to lead its freight-rail business in the Americas. In the role, she'll focus on project delivery, maintaining strong client relationships across the industry and growing the firm's freight-rail business in key markets, AECOM officials said in a press release. A long-standing member of the Women's Transportation Seminar, Strohecker was recognized as "Rising Star" in the rail industry by Progressive Railroading in 2015.

WSP USA has named Maxine Hill New York City area manager for transportation and infrastructure, effective June 1. She'll be responsible for client relations, project performance and management of transportation operations in New York City. Hill currently serves as WSP's project manager for the Moynihan Train Hall redevelopment at New York Penn Station. She previously worked as WSP's project director for the Central Terminal B project at LaGuardia Airport. Before joining WSP in 2012, Hill had a two-decade career as an engineer and project manager in the United Kingdom, including a stint as project director for Network Rail's transit projects.