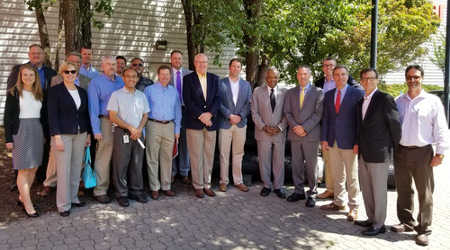 Tensar has operated the plant, one of the largest manufacturing facilities in the geogrid industry, for more 30 years, according to a press release issued by the Railway Engineering-Maintenance Suppliers Association (REMSA). REMSA coordinated the event.

Tensar announced last year that it would bring an additional 35 percent of production capacity on line at the Morrow facility in 2018.

"We are focused on providing the transportation industry with a reliable product that reduces costs and increases safety on both railways and roadways. We strongly support sound federal policies that encourage growth and innovation in the transportation sector," said Lawrence.