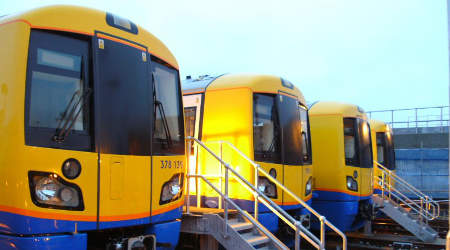 Transport for London has awarded a $149 million contract extension to Bombardier Transportation to service trains operating on the London Overground network. The agreement extends the length of an existing train services contract from December 2023 to May 2030. Bombardier will provide maintenance and support services for its Electrostar Class 378 fleet. Maintenance will occur at four locations in and around London, Bombardier officials said in a press release.

Alstom has completed its first all-electric locomotive at its plant in Madhepura, India. The unit is part of a $4.33 billion order for 800 electric double-section locomotives. Signed in 2015, the agreement is one of the biggest contracts in Alstom's history. Each 12,000-horsepower locomotive has a hauling capacity of 6,000 metric tons and speed of 75 mph. The units were developed with the support of six Alstom sites in France, according to a company press release.

Cubic Transportation Systems and Australia's Transport for New South Wales plan to expand an open-payment trial that enables contactless ticketing across the Sydney light-rail and ferry network. The trial, which began on the Manly Ferry service in July 2017, initially allowed riders to use Mastercards to pay for travel. With the contactless trial extension, passengers will be able to use American Express and Visa cards to buy fares. The open-payment system won't replace Transport for New South Wales' existing Opal fare system, which is used by almost 14 million people per week. Instead, the trial will provide "freedom of choice when it comes to paying for travel," Cubic officials said in a press release.

Tealinc Ltd. is accepting applications for its 2018 scholarship program. The company will provide two $1,000 scholarships to children or dependents of people working in an industry that manufactures or produces goods, or is involved in transporting them. Example industries include farming, coal mining and transport, scrap steel recycling, and food manufacturing. Candidates must be enrolled in, or in the process of enrolling in, a technical school, trade school or college. The application deadline is March 30. For more information, visit TeaLinc's scholarship page.