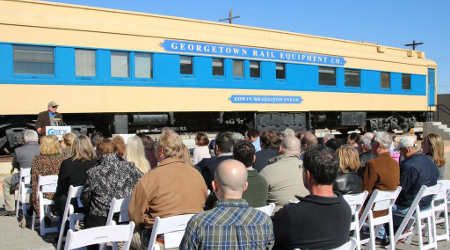 Georgetown Rail Equipment Co. (GREX) hosted an event held this week to honor the Snead family, which founded the company. The family became known in the rail and quarry industries in the 1940s, when Edwin Brazelton Snead founded Texas Crushed Stone. He also founded Georgetown Railroad in 1958 to haul limestone from Georgetown to Austin, Texas. His eldest son Ned went on to establish GREX. This week's celebration was hosted in the GREX Business Car 400, which also bears Brazelton Snead's name. The 1920s-era car recently was moved to a permanent location at the company's Georgetown headquarters, where the car will be used to host special events, customer meetings and charitable events.

Harsco Rail Europe has begun delivering 31 rail vehicles to Switzerland's national railroad Schweizerische Bundesbahnen SBB for the maintenance of the Gotthard Base Tunnel. Harsco obtained the contract for the order in 2013. Last month, Harsco held a ceremony to mark the delivery of the first six of 13 base vehicles, which weigh 80 metric tons. The units can be powered by electricity alone or a combination of diesel and electric power. The base vehicles can be operated from the driver's cab, via remote control or from other wagons.

HNTB Corp. has appointed Michael Sweeney executive vice president. He has held various leadership positions since he joined the firm in 2012, including as New York office leader and Northeast division president. In the new role, he'll continue to serve as Eastern U.S. region president, overseeing more than 2,000 professionals in the firm's Northeast, Mid-Atlantic and Southeast divisions. Sweeney has 31 years of experience in transit, design, construction management and program management, alternative financing and delivery, and disaster recovery. He continues to be involved with the American Railway and Maintenance-of-Way Association, as well as the American Public Transportation Association's high-speed rail committee.