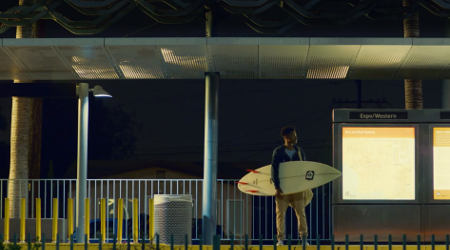 AECOM has released its first television commercial to show "infrastructure's power to connect communities," company officials said in a press release. Filmed by director John Singleton and created by Los Angeles advertising agency Battery, the ad is part of a new AECOM campaign that focuses on the human impacts of its clients' projects. The campaign is dubbed "Imagine it. Delivered." The commercial, which began airing yesterday, depicts a young surfer traveling on a Los Angeles County Metropolitan Transportation Authority (Metro) light-rail train from South Los Angeles to a beach in Santa Monica. AECOM has worked on rail projects with L.A. Metro, along with other major infrastructure projects throughout the world.

ZTR Control Systems announced a new partnership with Surtees Rail Group in South Africa. ZTR's products will be used to upgrade Surtees' fleet and eventually locomotive fleets throughout South Africa and beyond, said Surtees Director Tony Wood in a press release. ZTR offers the NEXSYS™III-i control system, which is designed to increase locomotive adhesion and integrate with automatic engine start-stop technology. Along with NEXSYS, ZTR and Surtees will offer a products and services aimed at extending the life of a locomotive by 15 to 20 years, according to the press release.

Brian Fulcher has joined McMillen Jacobs as a principal tunnel engineer based in the Pasadena, Calif. In the role, he will support existing tunnel and underground design and construction projects. Fulcher has more than 40 years of experience on design-bid-build and design-build projects in the United States, Canada, Taiwan and Puerto Rico. Those projects include tunnels, shafts and caverns for metro systems, hydro-electric schemes, roads and utility systems. Before joining McMillen Jacobs, Fulcher was vice president of a national tunnel and contracting firm working on projects throughout the United States and Canada.

Alstom has received a $56 million order from Hohenzollerische Landesbahn AG for 10 Coradia Lint regional trains. The diesel multiple units will be built in Alstom's plant in Salzgitter, Germany, and delivered by May 2019. The units will run on the RE Ulm-Aalen, RB Ulm-Langnau and RB Ulm-Munderkingen lines. The Coradia Lint 54 is a low-consumption diesel multiple unit that can reach a maximum operating speed of 87 mph. Equipped with Wi-Fi service, the two-car trains ordered have a total seat capacity of 150 passengers.