There are many reasons why track needs to be surfaced and tamped over time. Heavy rains or cold winter weather could create pockets and erode stability, while the continual pounding and lateral thrusts of trains could shift a track out of line.

With more freight and passenger trains traversing lines after the pandemic slowdown and unusual weather cropping up all over North America, a lot of track has absorbed additional punishment in 2021.

To rectify trackbed issues, railroads use surfacing and tamping equipment. So the onus is on the equipment manufacturers to provide productive, efficient and accurate machinery.

To find out what’s new or improved in the surfacing and tamping equipment sector, Progressive Railroading reached out to a number of suppliers. The emailed responses from four equipment makers follow. 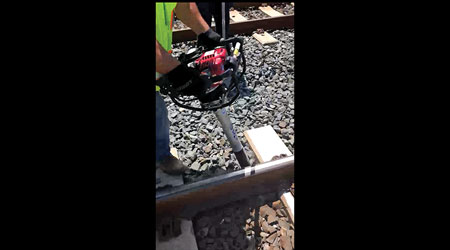 The model VPS is a hand-tamping machine that’s equipped with a Honda four-stroke engine and weighs 43 pounds.
Geismar North America

The machine features anti-vibration handles and an ergonomic design to increase an operator’s comfort during use. A single trigger on the operating handle allows better control for the user, Geismar officials said.

With a vibration frequency of 92 Hz, a slight rotation and up-and-down movements, the tool can ensure proper stabilization of a track, they added.

The machine is suited for use in and around head blocks and other switch areas that production tampers leave unaddressed, Geismar officials said. It also can address run off from bridges.

Geismar expects to release a battery version of the tool in the fourth quarter.

There are two distinct categories of track maintenance: production and spot maintenance. Spot maintenance — with a lower operating cost — features the use of tamper and ballast regulator attachments with backhoe loaders and hydraulic excavators in areas where it’s not possible to shut down tracks, Mitchell Rail Gear officials said. With minimal track time availability, work can be performed off track with attachments that can be rotated as needed.

Mitchell Rail Gear offers a tamper attachment for backhoe loaders and excavators. The tamper can be used on rail or off rail since it can be rotated as needed, and can be configured as a single- or double-tamping head to tamp both sides of a track at once.

Another Mitchell Rail Gear offering is a backhoe tie switcher system tailored for backhoe loaders to replace ties. It includes the tamper and ballast regulator attachments, along with a robotic-style tie head. 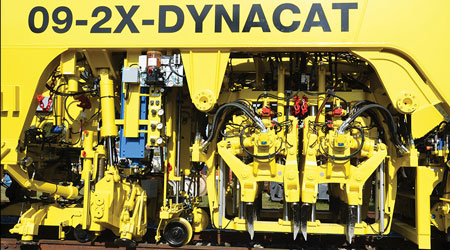 The 09-2X DYNACAT’s new feature is two-tie tamping units that enable either one or two ties to be tamped in one operation.
Plasser American Corp.

In line with its mission to offer high-capacity, precise and reliable equipment, the 09-2X DYNACAT continuous-action tamper is Plasser American Corp.’s newest machine. It’s designed to combine multi-tie tamping for increased productivity and a dynamic track stabilizer so production and switch tamping can be performed in one operation using one operator.

The 09-2X DYNACAT’s new feature is two-tie tamping units that enable either two ties to be tamped in one operation for higher tamping performance or only one tie to be tamped if the tie spacing becomes irregular or skewed.

The machine is designed to automatically change from two-tie to one-tie tamping through an automated tie locating analyzing system. Each tamping unit can be lifted and lowered individually to provide maximum flexibility during tamping for maintenance or renewals jobs, which makes the 09-2X DYNACAT more versatile for a user, Plasser American officials said.

That production capability is especially important for high-density railways where track availability is minimal, they said.

Plasser American also offers the 09-2X DYNACAT on a full contract basis or as a service to operate and maintain customer-owned machines. 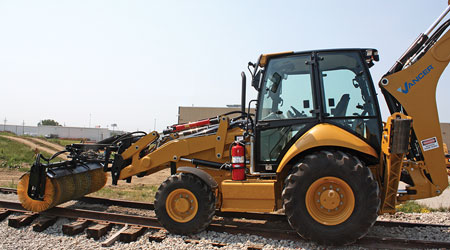 Fluctuating temperatures, exposure to extreme weather and dozens of heavy trains rolling over tracks each day can alter track performance. To boost track stability and operate more safely and efficiently, surfacing and tamping are integral elements of track maintenance.

Railroads turn to Vancer for high-production tamper attachments designed to work with the company’s hi-rail excavators and backhoes. Vancer also offers ballast brooms that attach to hi-rail backhoes for cleaning up work zones and keeping areas clear of debris.

By building versatility built into a hi-rail backhoe loader, railroads can get more done with fewer machines, Vancer officials said. Attachments such as a tamper, ballast broom, blade or auger can diversify the machine to accommodate various maintenance-of-way needs.

For spot maintenance, the hi-rail backhoe loader’s proprietary system is designed to allow the machine to move on and off track quickly, which reduces relocation downtime. It also can stow hi-rail gear out of the way when operators need to work off track to prevent any components from being left behind.