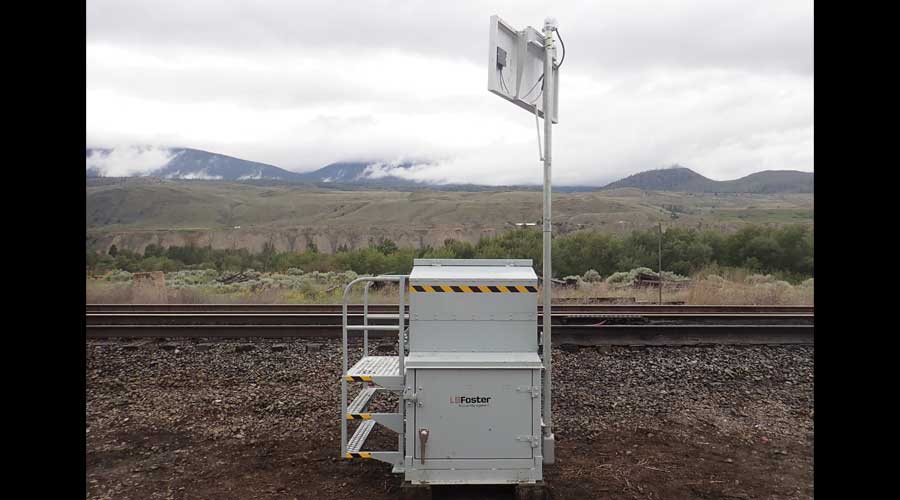 L.B. Foster Co. has worked closely with customers in 2020 to ensure its friction management programs are working at peak efficiency, capturing fuel savings and extending rail life. The firm’s Total Friction Management (TFM) initiative combines products and field services with accountability to ensure that such benefits are fully realized by customers, L.B. Foster officials said in an email.

In addition to rolling out a remote monitoring platform for friction management program trackside assets — which allows the company to accurately monitor and respond in a timely manner to issues as part of TFM — L.B. Foster also has introduced real-time rail-wear monitoring, they said. The monitoring analysis uses rail measurements captured by geometry car runs and processes that data through a proprietary algorithm to assess and identify any changes in the rate of rail wear for key critical curves. 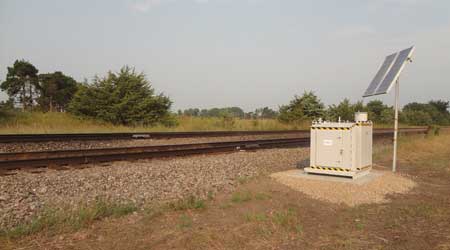 Loram Friction Management offers several curve lubricants that are engineered to meet specific challenges. The company has developed a portfolio of products designed to be environmentally friendly and provide maximum carry distance with as little equipment as possible to help reduce a railroad’s overall maintenance costs.

Loram’s series of biodegradable options aim to solve problems at the wheel/rail interface, including EcoCurve Heavy Haul, EcoCurve Trackside and Rail King HL. EcoCurve Heavy Haul is designed for heavy-haul applications, carries the European EcoLabel, is suitable for use near rivers and other bodies of water, and is pumpable down to -40 F.

EcoCurve Trackside — which carries the European EcoLabel — has obtained wide acceptance in the global transit market, while Rail King HL offers high load-carrying additives for heavy-haul applications and is pumpable down to -20 F, Loram officials said.

Loram also offers a range of top-of-rail friction modifiers that target problems related to controlling the coefficient of friction in the wheel/rail contact patch area. For example, TOR-Xtend is a clean synthetic friction modifier with a low evaporation rate that was developed for top-of-rail applications. Offering a carry distance up to six miles, it can increase fuel savings, reduce noise, and extend wheel and rail life, Loram officials said.

Meanwhile, TOR-H2OX is designed for railroads seeking the benefits of both water- and traditional synthetic-based friction modifiers. With a carrying distance of four to six miles, the hybrid top-of-rail friction modifier is engineered to provide fuel savings, reduce noise, and extend wheel and rail life, Loram officials said. 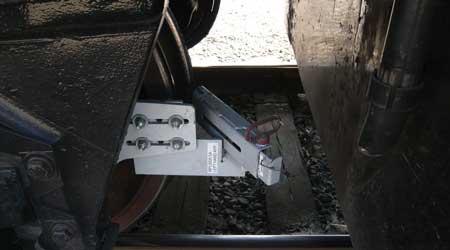 MPL Innovations Inc. has developed solid stick lubricants for both gauge face and top-of-rail applications. Its gauge face technology has been employed for two decades, while its top-of-rail product now is ready for testing at a candidate railroad after extensive testing was conducted at the Transportation Technology Center Inc., company officials said.

The top-of-rail Topstick material uses a different combination of lubricants to incrementally modify the coefficient of friction (COF) compared with the gauge face lubricant. It’s critical that the COF on the top of the rail be no lower than 0.35 so that a locomotive’s tractive effort isn’t compromised, MPL officials said. The lubricant is fed into the wheel using a constant-force spring that applies it to the wheels and conditions the rail whenever a locomotive is moving.

The key characteristics of the MPL NatureBlend stick lubrication and the Topstick systems are low cost, reliability, fuel savings of between 2 percent and 3 percent, and more than 35 percent wheel-wear reduction and biodegradability, company officials said. In addition, the top-of-rail product uses the same truck frame attachment bracket as the wheel flange lubricators to help reduce installation costs. 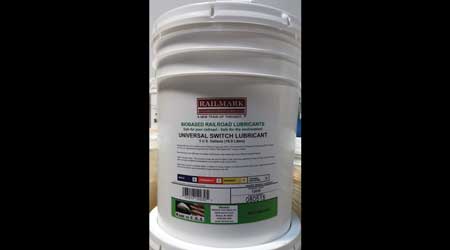 Manufactured in the United States from domestic renewable crop-based oils with a lithium-based thickener, the ECORail lubricants are safe for rail employees, the public and environment because they contain no heavy metals, chlorine or harsh odors, Railmark officials said. The lubricants have viscosity indices that are twice as high (over 200) than equivalent viscosity petroleum-based oils, providing more stable viscosity at different temperatures and a wider range of operation, they said.

Due to their polarity, biobased molecules bond and adhere to metal surfaces better than petroleum-based oils and greases, and have a higher flash point than mineral greases to help increase safety.

Using up to 75 percent less lubricant per train, R2K can lubricate eight feet of track with a more precise application to the gauge corner/face above the wheel flange with no waste or castoff, company officials said. Because each train consumes all grease, there are no hazardous materials requirements, they added.

R2K mounts in the apex of a curve for bidirectional traffic, helping to reduce maintenance costs because there is no train contact. It is designed to be installed and removed quickly for track maintenance.

The Robolube R2K temperature-controlled system is engineered for continuous operation in cold weather, with a heating option to melt snow and ice. A web-based user interface provides status updates, notifications and diagnostics with real-time data.

The Robolube R2K is a stand-alone system powered electrically with a liquid-propane-fueled generator. It can provide a quick return on investment in grease savings alone, Robolube officials said.

Robolube also has partnered with Schaeffer Oil to develop Robolube R2K Rail Barrier™, a proprietary aluminum complex lubricant. When used in the R2K, it provides exceptional carry-down properties, is resistant to water wash off, and provides shear and mechanical stability, company officials said. 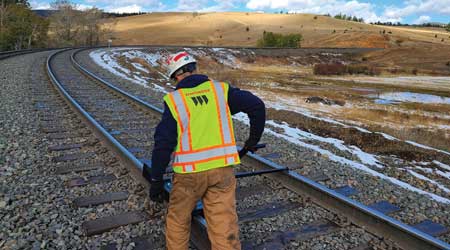 For almost a decade, Whitmore Rail has offered the TOR Armor® Friction Modifier, which has helped the company become a leader in friction modification for major Class I, short-line and transit customers internationally, company officials said.

TOR Armor carries more than 3 miles down a track at an application rate lower than other products, Whitmore officials said. The company also has consistently reduced the number of trackside applicators required with competitive products by converting to TOR Armor, they added.