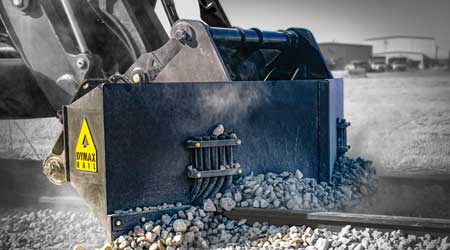 The keys to establishing, maintaining and improving a track’s condition are surfacing and tamping work.

Railroads seek to create an optimal track surface by using machines such as tie and spike inserters, tampers, ballast regulators and undercutters. The equipment is engineered to install rail, ties, fasteners and ballast, gauge and level track, and improve drainage.

Since ties deteriorate over time, they need to be replaced when they no longer properly hold fasteners and help maintain track gauge. Tie replacement work usually is performed in conjunction with surfacing tasks, including ballast renewal and tamping.

Although the COVID-19 pandemic has greatly reduced freight-rail traffic, it has greatly increased work windows, enabling many railroads to perform more maintenance-of-way (MOW) projects, including surfacing and tamping.

To accomplish all planned MOW work, railroads are counting on a big assist from effective and hard-working equipment. That, in turn, means they’re relying on equipment suppliers to provide machines that are more reliable, productive and efficient.

In August, Progressive Railroading contacted equipment providers to learn about new developments and refinements in surfacing and tamping machines. Emailed responses from eight of them follow.

DymaxRail provides a line of ballast handling and track maintenance work tools for backhoes and hydraulic excavators. The company continues to strive to develop solutions for spreading, tamping, digging and loading ballast materials.

Another new product in the company’s lineup is the DymaxRail Ballast Plow. An attachment is available for backhoe loaders and hi-rail equipment. Available with heavy rubber or steel cutting edges, the ballast plow features integrated shim adjustable rail wheels to provide a smooth operation on rail. It’s ideal for sidecasting spilled materials from cars or spreading out dumped ballast, company officials said. 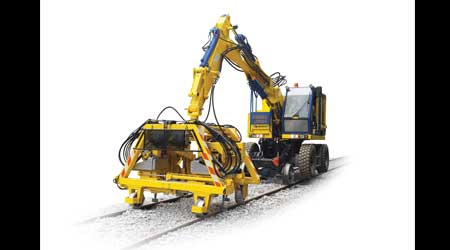 For a number of years, Geismar North America has offered several modular tampers. The model MB8-AC switch tamper is offered as an attachment for the company’s KGT loader to provide customers more versatility. It‘s ideal for stabilizing track mud spots and tamping jobs that would not be as cost effective or logistically sound when using production equipment, Geismar North America officials said.

The MB8-AC tamper can tamp tangent track, turnouts and diamonds either on track or on adjacent tracks. As an attachment on a loader, it provides off-track access to tamp during short work windows, company officials said. It sports two independent heads, powerful vibratory motors and variable depth controls. A standard wireless remote-control feature allows an operator flexibility in either manual or automatic tamping modes, company officials said.

Meanwhile, Geismar North America’s Storm is equipped to fight snow in the winter and serve as a grapple truck in the summer. The MB8-AC tamper can be incorporated as an option to the Storm Wizard hi-rail truck. The tamper addition further enhances the vehicle as a 365-day piece of equipment, company

officials said. It offers a 27-foot crane reach and standard boom end hydraulics to work the MB8-AC. Railroads and contractors will find off-track and road travel to the next problem spot an attractive option, company officials said. 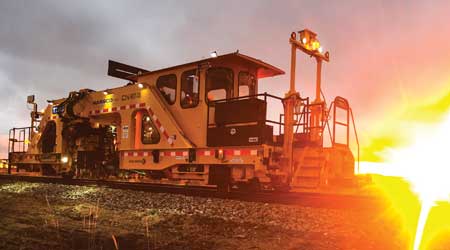 Harsco Rail’s new 16-tool production/switch tamper — the TX16 — is now field proven. Designed to decrease downtime on track and increase productivity in the field, the machine can handle an average of 32 ties per minute, operate within compressed work windows and perform across various track conditions, company officials said. Its cab-deployable reference, integrated high-speed measurement and visibility have coalesced to deliver increased full-day productivity in the field, they said. 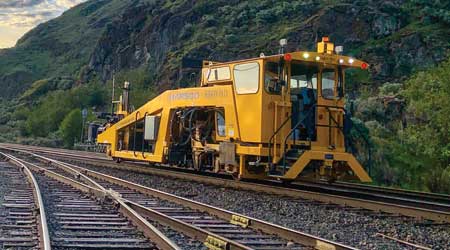 This year, Holland LP is marking its 85th anniversary. Over the past year, the company — which continues to develop rail equipment solutions that are as comprehensive as possible — has expanded its track maintenance and construction services, specifically in western Canada.

“To meet the challenges of the terrain and track structure, we invested in additional equipment to get the job done for our customers in western Canada,” said Kelly Phillips, Holland’s director of operations for rail services in Canada.

Combined with the firm’s personnel and expertise, the equipment allows railroads to get the job done quickly without sacrificing safety and quality for surfacing projects large and small, Holland officials said. 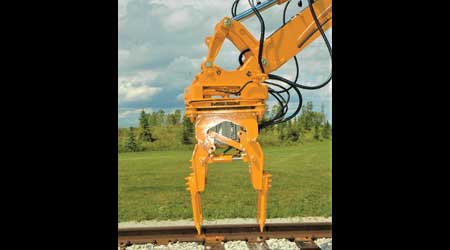 Mitchell Rail Gear’s backhoe tie gang tamper is one of a series of attachments the company offers for its mini tie gang and spot maintenance tamping system. Mitchell’s tamper is designed to fit various pieces of construction equipment, such as backhoe loaders, mini and medium excavators, and skid steer loaders.

Originally designed so backhoe loaders could be light and strong, the tamper eventually evolved to fit other construction equipment. The current tamper — which can be used on or off rail — is made of high-strength steel while keeping weight at a minimum, but is strong enough to be used by medium excavators, Mitchell Rail Gear officials said.

The tamping tools are designed to insert a depth of 21 inches beneath a rail level. The machine can vibrate the tamping tools at 70 to 110 hertz, with a tip displacement of 3/16 inches and a down force of 300 pounds per tool.

The tamping tools can squeeze ballast under a tie with an extreme force to compact the ballast, company officials said. The tamper can be built as a single or double attachment to tamp both sides of a rail, achieving results that are comparable to a production tamper, they said. 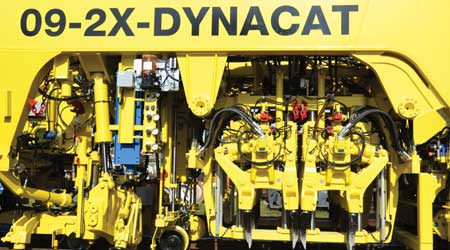 With work windows at a premium, it’s even more difficult for railroads to find track time to complete necessary maintenance requirements.

The 09-2X DYNACAT from Plasser American combines several features to help railroads complete the most work in limited time, company officials said. It can perform production and switch tamping, continuous-action tamping, and multiple tie tamping and dynamic track stabilizing, resulting in high productivity with fewer operators at the lowest overall cost, they said.

The 09-2X DYNACAT’s key feature is two tie tamping units that can tamp either two ties for higher tamping performance or one if tie spacing becomes irregular or skewed. Each tamping unit can be operated individually to provide maximum flexibility and versatility during tamping — a production capability that’s especially important for high-density railroads with minimal track availability, company officials said.

The 09-2X DYNACAT can be purchased as a complete new machine or as an older DYNACAT that’s upgraded via a complete factory rebuild, including the addition of the latest PLC electrical control system and a new satellite, they said. 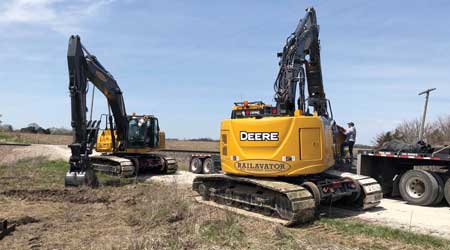 The Railavators also feature a new hydraulic system and more components in the common manifold, which means less hoses,  separate components and joints to potentially leak, RCE officials said. The company also updated the Railavator structure, including the hi-rail linkages and supports by extending support gussets and adding weight to the links and frames to reduce frame flexing and potential cracking.

In addition, the drive axle mounting has been changed to boost strength and durability. An improved rotary manifold now has a higher pressure rating and longer life, and a push-button monitor continues to control the hi rail and all available attachments from inside the cab.

RCE’s 50G, 85G and 135G Railavators feature an adjustable lower track frame. When retracted, the machines are under the legal size for transit without a required permit. In work mode, the hydraulically operated frame expands to straddle the track. 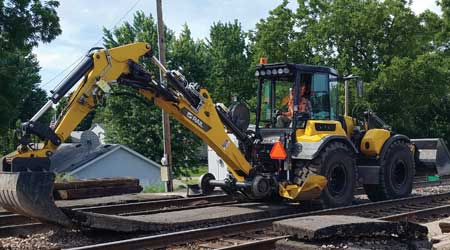 Train travel produces enormous forces that, over time, will deteriorate a track geometry. Compounded with various weather swings, the forces can produce an unstable trackbed. While on-track dedicated machines have been around for years, Vancer understands that customers need an off-track option to maintain a better and safer track for today’s demanding rail travel, company officials said.

Recognizing that some railroads seek the mobility of rubber-tired backhoes, the Huddig 1260D wheeled or hi-rail excavators can provide the necessary power and attachment options of single, double or specialty tamping heads to fit budget and performance needs, they said. The excavators range from 8 to 36 tons.

Vancer offers new and used packages to rent, lease-to-purchase or directly purchase a Huddig 1260D. The company has a training, field service and tech support team dedicated to serving rail customers to ensure their projects are completed quickly and safely, Vancer officials said.