The SpikeEase: A Priceless Investment in Rail Safety and Productivity 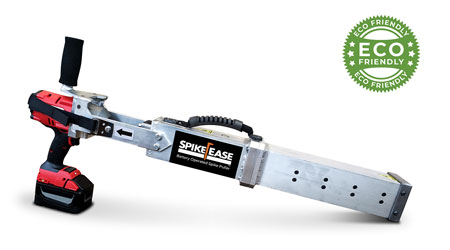 Rail spikes may be tiny objects in stature, but their importance to any rail yard’s fastening system is massive.

Used to fasten tracks and tie plates to the railway sleepers, rail spikes are placed and removed when rail maintenance is needed.

Over the years, when rail workers needed to pull spikes they had only two options; hydraulic pullers and claw bars. While both of these approaches are renowned in the industry, they both carry many flaws.

Back-Breaking Claw Bars
The original solution to spike pulling, rail workers have been using claw bars since the dawn of railroads in the U.S. back in the 1800’s. Here in the 21st century, however, there is absolutely no reason why these tools should be used to pull spikes. 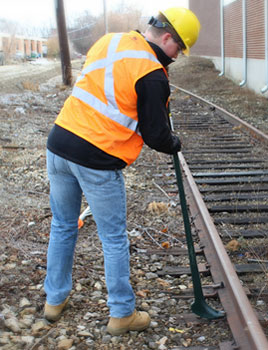 One of the many fatal flaws of this age-old tool is the physical strain it puts on a rail workers’ body. Because of the tool’s ineffective nature, workers are forced to abandon standard procedure, which often leads to injury.

The potential for injury, coupled with the fact that the claw bar reduces productivity, makes it look like the dinosaur of a tool it is.

Imagine using the claw in extreme weather, namely freezing winter temperatures; it becomes impossible. On those occasions, the spikes could be so rock-solid in place that attempting to pull them would feel like pulling a sword out of stone, rendering this method completely useless.

Hazardous and Heavy Hydraulic Pullers
Just like the claw bar, hydraulic spike pullers have many flaws; potentially even more. 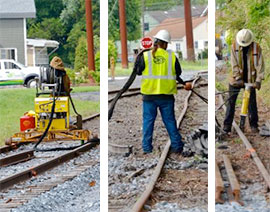 For starters, the process of pulling spikes with a hydraulic puller requires a minimum of two-to-three people; one to do the actual pulling and one or two to handle all the hoses and hydraulic generators, both of which add anywhere from 70-90 pounds to the puller and take a significant amount of time to set up. 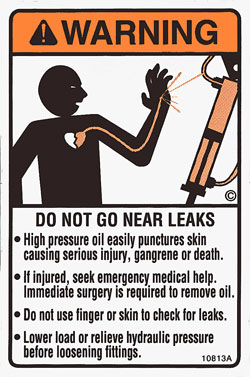 Those hoses and generators tether the worker and restrict their range, making the removal of spikes in tight areas almost impossible.

On top of that, there's the whole subject of the actual hazardous hydraulic fluids themselves.

Just look at the label on any hydraulic puller. This toxic, high-pressure oil can puncture skin, which would cause serious injuries and medical conditions.

If the fluids leak, it will contaminate the soil and water. This would require special removal by the EPA. 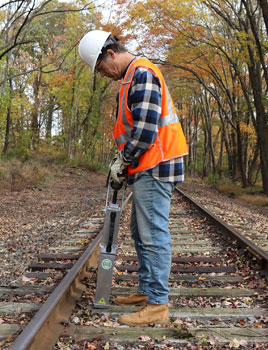 There is finally a better way to pull spikes.

Focused Technology Solutions, a Marmon/Berkshire Hathaway Company has developed the SpikeEase, the first and only battery-operated spike remover on the market.

This disruptive product is an investment in safety and productivity that quickly pays for itself, as it allows for safer and faster spike removal.

The tool increases production efficiency by eliminating two-to-four workers from the spike pulling process, as pulling spikes is now just a one-person job. It’s able to remove a spike in as fast as three-to-seven seconds, while boasting up to 400 spike pulls per battery charge.

The SpikeEase has been noted for its ability to reduce injuries. Weighing in at under 30 pounds, it offers a lightweight solution when compared to its competitors, whose products could way up to 70-90 pounds heavier. 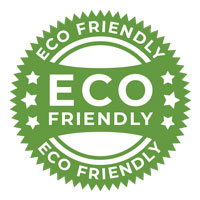 Perhaps the most groundbreaking attribute of the SpikeEase is the elimination of the claw bar and hydraulics, making it the most environmentally-friendly spike removal tool on the market. There are no generators, no fifty-foot hydraulic hoses and no hazardous or dangerous fluids. This allows the SpikeEase to operate easily with zero setup time and allows it immediate access in remote areas, such as bridges and tunnels.

The SpikeEase is being used by multiple Class 1’s and FTS has received rave reviews and a multitude of positive feedback.

“By the first quarter of 2020, the SpikeEase will become an industry standard,” Peter Bartek, President of Focused Technology Solutions, said.

Learn more about this innovative tool.