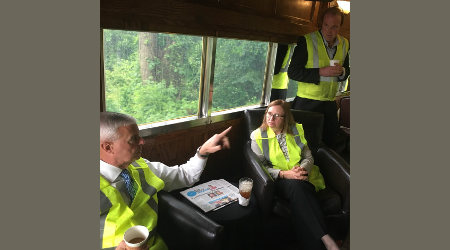 The lawmaker visited the structure as he traveled from Fort Smith to Rudy, Ark., on one of the railroad's excursion cars. Fort Smith city officials recently applied for a federal grant to repair and rehabilitate aging rail infrastructure, including the Arkansas River Bridge.

The city applied for the funds through the Fostering Advancements in Shipping and Transportation for the Long-term Achievement of National Efficiencies (FASTLANE) program.

At the start of the journey, A&M Chairman Caren Kraska greeted Womack and guests at one of the railroad's warehouse facilities in Fort Smith, according to a press release.

"I am pleased to support the City of Fort Smith's 2017 FASTLANE grant application to repair three rail bridges, including the critical Arkansas River Bridge," said Womack in the news release. "It is vital we ensure the future viability of rail transport through the western Ozarks."

Earlier this month, President Donald Trump signed an omnibus appropriations bill that allows for a second round of FASTLANE grants. In fiscal-year 2017, the federal government will distribute $850 million worth of grants through the program.