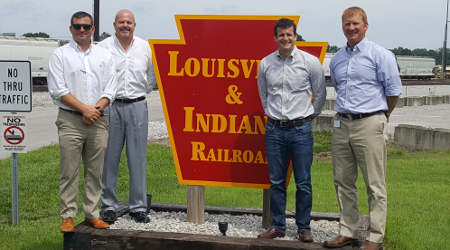 The 106-mile short line has contracted R. J. Corman to perform improvements that will enable the railroad to increase rail-car weight capacity to 286,000 pounds. From 2015 through 2017, 94 miles of continuous-welded rail and more than 80,000 ties will be installed.

"It was a pleasure to learn more about L&I Railroad, R. J. Corman, and the services they provide in Indiana's 9th District and beyond," Hollingsworth said in a press release issued by the NRC. "Their commitment to maintaining a safe, reliable freight network has enabled southern Indiana businesses to establish themselves, thrive and grow."

Also during the visit, the rail stakeholder group discussed the 45G short-line tax credit. Since 2005, a series of one- and two-year extensions of the credit have enabled short lines and their customers to reinvest billions of dollars in infrastructure, according to the NRC.