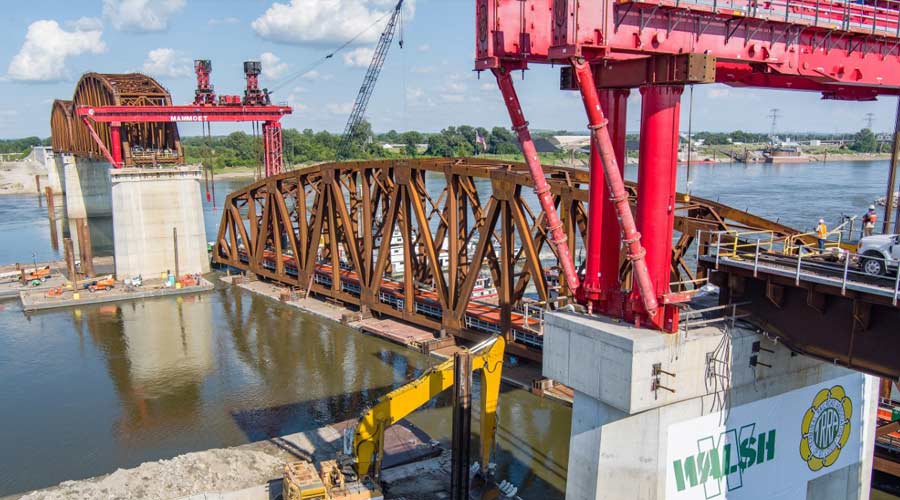 The Terminal Railroad Association of St. Louis (TRRA) and St. Louis Regional Freightway officials this week marked the installation of the final truss at Merchants Bridge, one of the last milestones of a $222 million project to reconstruct the bridge.

The bridge serves as a vital rail artery across the Mississippi River. Owned by TRRA, the bridge has required reconstruction due to speed, clearance and load restrictions since at least 2016. The project calls for removal and replacement of the three river-span trusses, seismically retrofitting the existing river piers and improving the east approach, TRRA and St. Louis Regional Freightway officials said in a press release.

The project began in 2018 and is slated to be completed in the coming weeks, TRRA and St. Louis Regional Freightway officials said. The truss is the last of three to be installed; work on the trusses has been underway since September 2021. The Walsh Group is the project's contractor.

Once reopened for freight- and passenger-rail service, the bridge will provide expanded, more reliable rail capacity that will speed up freight movement. Six Class Is and Amtrak will use the bridge.

The project is partially funded by a $21.45 Consolidated Rail Infrastructure and Safety Improvements (CRISI) grant awarded to TRRA by the Federal Railroad Administration in 2020. TRRA is covering 90% of the project's construction costs.