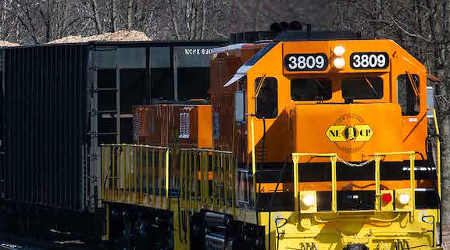 The Massachusetts Department of Transportation (MassDOT) and Massport have applied for three federal Infrastructure for Rebuilding America (INFRA) grants for capital projects that would include upgrading the New England Central Railroad's capacity.

The grant proposals are part of Massachusetts' efforts to improve the state's freight transportation system, state officials said in a press release. The three INFRA applications involve:
• MassDOT's proposal to upgrade more than 31 miles of rail and 20 bridge structures on the Massachusetts portion of the New England Central Railroad, a regional rail corridor between Connecticut and Canada. The line serves several key employers in Massachusetts. The upgrade will allow shippers and receivers to use full carrying capacity of each rail car in order to lower their costs.
• Massport's request of $63.33 million to complete the Revitalize New England’s Maritime Gateway Project. Of the grant request, $57.93 million would be used to fund design and construction of Berth 10 and the GateVision operating system, and $5.4 million would fund design and construction of the Cypher-E Freight Corridor.
• MassDOT's request of $33 million in funding to complete the Interstate 495 Corridor Improvement Program.

Also last week, MassDOT posted online a draft of its Massachusetts Freight Plan, and is seeking public comments on the draft electronically until Dec. 6. The draft plan establishes the rationale for specific improvements to freight locations.

The last Massachusetts Freight Plan, which was released in 2010, recommended improvements to Worcester's Franklin Street Terminal, the establishment of the Industrial Rail Access Program, the dredging of Boston Harbor, and improvements in freight rail lines' clearances and weight limits — all initiatives which have been completed or are underway.

"Freight transportation is vital in keeping Massachusetts competitive economically with domestic and international trade partners," said Transportation Secretary and Chief Executive Officer Stephanie Pollack. "We must make wise and strategic decisions to improve the infrastructure of freight corridors and to collaborate with stakeholders so our policy decisions will support this important sector of the Massachusetts economy."