Under the agreement, G&W will acquire P&W for $25 per share of common stock, or $126 million in cash. The acquisition is expected to close after P&W shareholder approval in the fourth quarter, the companies announced in press releases.

G&W will fund the acquisition through its revolving credit facility under which it had available capacity of $542 million as of June 30, company officials said. 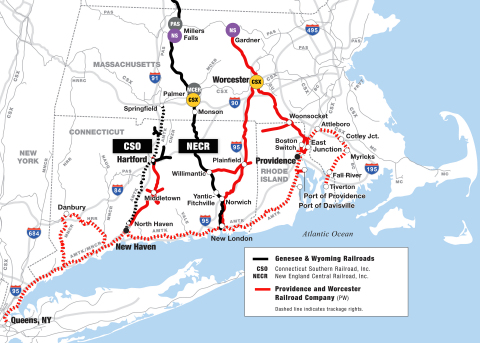 P&W's headquarters is in Worcester, Mass. The railroad employs 140 people, owns 32 locomotives and operates over 163 miles of owned track and 350 miles under track access agreements. It has exclusive freight access over Amtrak's Northeast Corridor between New Haven, Conn., and Providence, R.I., and trackage rights over MTA Metro-North Railroad, Amtrak and CSX between New Haven, Conn., and Queens, N.Y.

P&W interchanges with G&W's New England Central Railroad (NECR) and Connecticut Southern Railroad, as well as with CSX, Norfolk Southern Corp., Pan Am Railways, Pan Am Southern, the Housatonic Railroad and the New York and Atlantic Railroad, and also connects to CN and Canadian Pacific via NECR.

If the acquisition is approved by the Surface Transportation Board, P&W would be managed as part of G&W's Northeast region led by Senior Vice President Dave Ebbrecht.

The acquisition would enhance G&W's service to customers and Class Is in New England, G&W officials said.

"The acquisition of P&W is an excellent strategic fit with G&W's contiguous railroads, the New England Central and the Connecticut Southern," said G&W President and Chief Executive Officer Jack Hellmann.

P&W also would enable G&W to "realize substantial immediate cost savings, to share and optimize the utilization of equipment and other assets, and to unlock significant new customer opportunities across sister G&W railroads as well as connecting partners at two Canadian Class I Railroads, two U.S. Class I Railroads and two regional railroads," Hellmann added.

For P&W, the acquisition "ensures that our company will continue to provide the quality of service which our customers and the communities we serve have enjoyed over the 40-plus years since we recommenced independent operations while at the same time continuing and improving on our programs to promote employee and community safety," said P&W Chairman and CEO Robert Elder.

In the first year of operation post-acquisition, G&W officials anticipate P&W would generate $35 million in revenue.