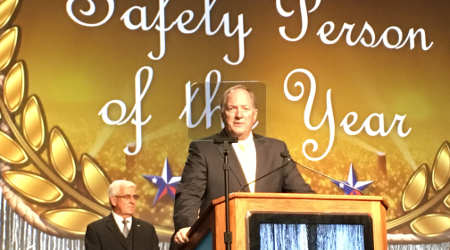 The bridge program manager for Old Augusta, LaPorte has had no Federal Railroad Administration-reportable injuries in his 38-year career, ASLRRA officials said during an award presentation. He conducts Operation Lifesaver events for schools and trucking companies because he has a passion to help protect the public, they said.

Sparks serves as the director of safety, training and legal affairs, and chief of police for Arkansas & Missouri. He has been involved in law enforcement for 36 years and considers safety a "24-hour concern," ASLRRA officials said. He has helped lead a complete safety turnaround at the short line and also is active in Operation Lifesaver programs.

Before the two awards were handed out, Watco Cos. LLC SVP of Regulatory Relations and Compliance Gary Vaughn — who chairs ASLRRA's safety and training committee — said the association has decided to distribute the annual Jake Awards at the regional meetings in fall so the safety award winners could be better recognized by their peers.