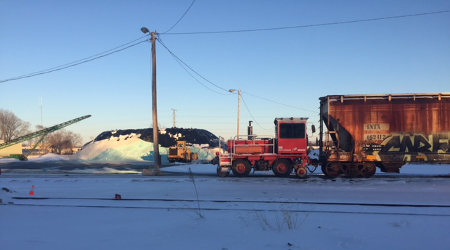 In the warmer months, the Wisconsin & Southern Railroad (WSOR) handles a high volume of construction materials and grain. When the cold months roll around, though, those shipments tend to slow down.

This winter, the regional has embarked on a new business venture that's helping to offset the traffic downturn, WSOR leaders say.

Starting in November 2017, the railroad began shipping road salt used to de-ice Wisconsin's roads, marking the first time the commodity has been railed into the state, says Jason Murphree, commercial director at Watco Cos. LLC, which owns the regional.

Historically, salt has been transported to Wisconsin by ship via Lake Michigan. That salt originates in Canada and ends up at a Kinder Morgan terminal. The commodity also enters the state on barges traveling up the Mississippi River from Louisiana.

As of early January, WSOR unloaded 20,000 tons of road salt into Watco Terminal and Port Services' (WTPS) facility in Madison, Wisconsin. The facility can store up to 80,000 tons of salt, or enough to fill about 800 rail cars, according to a blog post on Watco's site.

"We don't have that same drop-off in volume in the winter that we once had because salt is moving in a higher volume," Murphree says.

This year, WSOR expects to move about 1,500 rail cars of salt from a U.S.-based customer, which he declined to name.

The regional, which operates more than 800 miles of track in Wisconsin and Illinois, began shipping the salt after Watco realigned its commercial group to offer both rail and transloading services as one package for customers.

"Historically, we had transload sales people and we had railroad sales people. We would try to do some cross selling, but we didn't have direct responsibility," he explains. 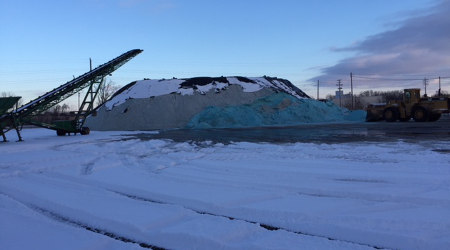 Watco Terminal and Port Services' facility in Madison, Wisconsin, can store up to 80,000 tons of salt, or enough to fill about 800 rail cars.
Photo – Watco Cos. LLC

Murphree believes the realignment was a key reason WSOR landed the road salt deal. The customer wanted to ship salt into Wisconsin but had no employees in the state, so the combined rail and transloading offering made sense.

"This is one direction I can see the industry turning toward — offering a complete package. You're going to start to see more and more railroad holding companies and railroads really place an emphasis on transloading," Murphree says. "You can expand your railroad right of way by 100 miles by having a transload facility in the vicinity."

That emphasis also means learning to treat truckers as partners instead of the competition, he adds.

WSOR continues to work with the road salt customer nationwide. The regional is considering establishing salt terminals at five locations in the United States — two additional ones in Wisconsin and three others outside the state.

In a state where winter temperatures frequently dip into the single digits or fall below zero, there's healthy demand for propane to heat homes and businesses. In fact, Gov. Scott Walker late last year declared a state of emergency due to a propane shortage in Wisconsin.

The state's experienced road salt shortages, too, and has even explored using cheese brine to de-ice roads. With the salt stored at the transload site, however, there's a "constant, year-round supply of salt, no matter what the weather is doing," Murphree says.

WSOR's first propane customer, which is based near McFarland, Wisconsin, has been operating for about a year. That customer receives about 300 loads annually.

The regional also has added a new propane customer in Waldo, Wisconsin. Each year, WSOR expects to ship around 200 to 300 tank cars to that customer, according to Watco's blog.

Prior to these deals, the railroad had never shipped propane before. As a result, WSOR had to obtain necessary permits to handle the shipments.

"I didn't pick this location where the salt facility is — our customer did," he says. "We follow our customers' lead."