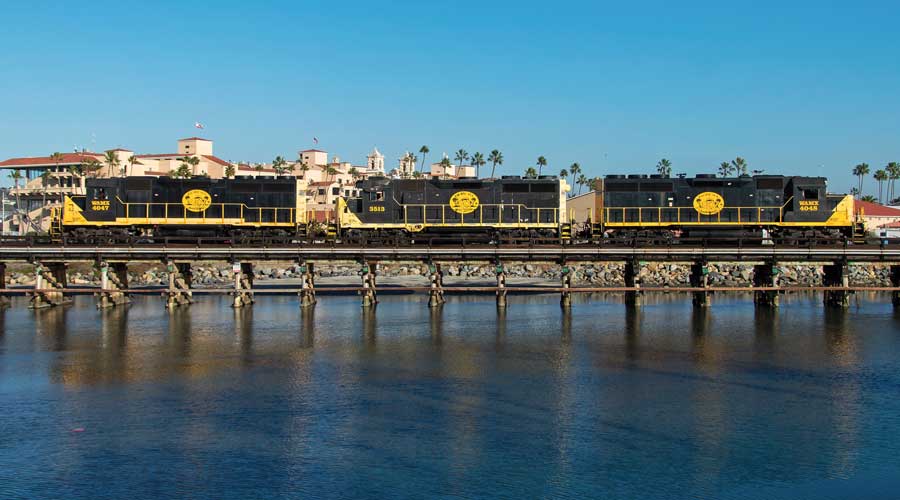 The 603 short lines operating in the United States play a critical role in the nation’s freight transportation network. They operate over 47,500 route miles — or 29 percent of the U.S. freight-rail system — and move one in five carloads annually, according to the American Short Line and Regional Railroad Association (ASLRRA).

They work together with Class Is to serve shippers, often providing the first or last mile of service for a shipment set for a longer journey. For example, 48 percent of freight-rail traffic is transferred from a Class I to a short line for final delivery; 9 percent is moved solely on a short line or regional; and 10 percent is moved from one Class I to another by a smaller railroad, according to the ASLRRA.

With a majority of North American Class Is adopting precision scheduled railroading (PSR) operations of late, the question arises: How has the PSR implementation trickled down to impact the short line industry? Has the spread of PSR been a good or bad development for short lines’ business?

Progressive Railroading in February and early March reached out to several short-line railroaders to get their perspective on dealing with the new operating strategy. The upshot? Although PSR has the potential for improving freight-rail efficiency, it’s impact on short lines so far has been mixed.

“There are pluses, minuses and unknowns,” says Chuck Baker, president of the ASLRRA. “On the plus side, ignoring the initial turbulence when this started a few years ago with the rough CSX summer, it’s unquestionable at this point that the network is operating smoother, faster and more efficiently.”

The “rough summer” that Baker refers to occurred in 2017, when CSX — under Chief Executive Officer E. Hunter Harrison — developed service performance issues as it began restructuring operations to a PSR model.

Harrison, who died in December 2017 before overhauling CSX’s operations, is considered by many to be the father of scheduled railroading. He had previously executed PSR strategies at CN and Canadian Pacific while leading those Class Is.

PSR is a departure from the common practice of holding trains until they’re completely full. Instead, deliveries are prioritized and hastened from origin to destination, and each asset is used and monitored constantly so customers can better plan their shipments. The PSR process is designed to improve customer service, control costs, optimize asset utilization, enhance safety and aid workforce development.

Since CSX launched its PSR plan, Norfolk Southern Railway, Union Pacific Railroad and Kansas City Southern also began phasing in the strategy. The Class Is are providing better service, and that allows short lines to help them better serve a customer base that prizes good service, says Baker.

“When you drill down in detail on the positive side of PSR, in a lot of locations there’s more frequent service — going up to five or even seven days a week now. And there are more frequent interchanges and pickups and better things to sell to your customers,” he says. “There are definitely some positives.”

And for short lines, the large roads’ transition to PSR has led to upheaval in the Class I network that, in some cases, enabled small railroad operators to step in and help alleviate those challenges.

“There are some customers who find it easier to locate on a short line — more so than perhaps they would have thought to do so before,” says Baker.

However, the Class Is’ PSR implementation also has brought with it some challenges, such as aggressive cost and workforce cuts.

“Thousands of people have been laid off [by the Class Is], and some of those people are field sales, marketing, customer service and interline people that customers and short lines had come to rely on. That upheaval — and losing good people — is tough,” Baker says.

Additionally, Class Is have eliminated some less profitable business to focus on business that better fits their revamped networks.

“Short lines want every customer, every carload, every time,” Baker says. “Obviously, we get the reality that some business is more attractive than others, but we want all the business.”

Opinions within the short-line industry vary on whether PSR has presented more problems or opportunities. Stefan Loeb, executive vice president and chief commercial officer at short-line holding company Watco Cos. LLC, views it as more of the latter.

“We want to adapt around what our [Class I] partners are doing. I think a lot of short lines like to get ticked and trash Class Is because PSR involves a lot of change,” says Loeb. “From [our] perspective, the Class Is are implementing PSR for their shareholders and in the name of efficiency and profit. So we’ve said, instead of fighting PSR, how do we adapt around it for it to be successful for us and our customers?”

He acknowledges others in the industry have pegged him “an eternal optimist.” But having a can-do attitude is helpful when trying to sell a short line’s first-mile-last-mile service, Loeb believes.

“From a short-line perspective, the opportunity to succeed — especially in the carload business — has never been better. You are [offering] that entrepreneurial first-mile, last-mile service to the customer, ”he says. “And when you hand that car off to an efficient, faster, long-haul network, that creates the best product I’ve ever seen in the industry.”

Not on the same page

At times, adapting to PSR has been precarious for short lines partly because Class Is haven’t rolled out their new operating models at the same time.

“It’s been in various stages. Obviously, [CN and CP] have fully implemented it and all the benefits and the potential are out there to be captured,” says Loeb. “I think CSX is there, if not very close to implementation — and that’s where a number of [our] successes have stemmed from, which is partnering with that efficient system and the first-mile and last-mile service that we offer.”

For example, in September 2018 Watco acquired from CSX a 126-mile line in Decatur, Illinois. The Decatur & Eastern Illinois Railroad (DREI) now operates between Decatur and Terre Haute, Indiana, and on 56 miles of track from Neoga to Metcalf, Illinois.

The first Class I spinoff in several years, the DREI serves a large Archer Daniels Midland (ADM) plant and a Tate & Lyle facility. Although the line had offered plenty of traffic for CSX, it required extensive operations. And, CSX was competing with two other Class Is in that same market. As a result, CSX was able to serve shippers on the line only three or fewer days a week, according to Loeb.

As soon as Watco took over the line, the DREI was able to ratchet up service to five days a week.

“We have no mainline, so we could serve the line consistently,” Loeb says. “And then the customers said, ‘Can you serve us seven days a week?’ So we started showing up every day at ADM and Tate & Lyle, and we grew the business just by showing up more per the guidelines of PSR and operating consistent daily service.” 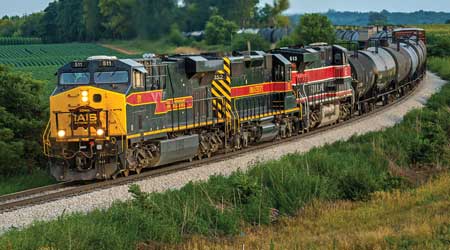 Meanwhile, PSR hasn’t affected the Maryland and Delaware Railroad Co. (MDDE) as much as President Cathrin Banks thought it might a year ago, when interchange partner NS was in the early stages of PSR.

If anything, the MDDE — which operates 120 miles of track along the Delmarva Peninsula in Delaware and Maryland — is finding a more efficient freight-rail network for its agriculture and poultry shippers, says Banks.

“In those early days of PSR, there seemed to be a focus [by the Class Is] on just streamlining operations, increasing revenue and decreasing the operating ratio,” she says. “And we were watching that carefully because if their overall traffic is declining, that impacts the short lines. But at least here at the MDDE, we didn’t feel that. Our volumes remained pretty steady.”

“NS canceled a lot of their storage agreements with customers and most of those customers still needed space to put some of their rail cars,” Banks says. “We and some of my colleagues in New Jersey saw opportunities for in-transit storage, and we have space available that lets us get more revenue.”

PSR also hasn’t had a “significant” impact on Iowa Interstate Railroad Ltd., according to President and Chief Executive Officer Joe Parsons. The regional operates 580 miles of track from Council Bluffs, Iowa, to Chicago, with a branch line to Peoria, Illinois, and interchanges with all Class Is.

“We actually gained a little bit of business because with the [Class I] service changes, some of the customers needed better solutions and options,” says Parsons.

Iowa Interstate responded by creating a portfolio of service products that go beyond moving rail cars — such as building unit trains and storing equipment for customers, he says. But despite a business gain, Parsons still wouldn’t characterize PSR as a “good thing” for the U.S. rail industry, he adds.

“It has been a positive that we’ve grown, but I’m not advocating for PSR. In my opinion, PSR means a lot of things to different people and there’s not really a true definition of it,” he says. “I started with an eastern Class I 27 years ago, and we were running scheduled trains then. And trust me, I would hear about it if a train left my terminal late.”

What PSR really boils down to is doing more with less, Parsons believes.

Ultimately, PSR will become a “foundational building block” in achieving a more efficient railroad system, Jakubowski believes. But the relationship between Class Is and short lines during the U.S. Class Is’ transition to the strategy has been less than collaborative, he adds.

“I think their pursuit of operating ratio objectives and matching themselves to their peers is what [PSR] has become, and they’ve taken some dramatic steps that are counterproductive in the long run,” Jakubowski says.

For example, the Class Is laid off key sales and marketing staff at a time when the rail industry wants to divert more truck business.

“Now you’re divorcing yourselves from the very people with direct relationships with these customers,” says Jakubowski. “That doesn’t make a lot of sense to me. And that’s a direct outcome of PSR.”

Additionally, some Class Is implemented large rate increases to improve their operating ratios and “chase away certain business for a variety of reasons,” he says. That scenario has contributed to a decrease in rail volumes and “created some confusion in the marketplace about what business railroads really want,” he adds.

In the bigger scheme of things, PSR is all about optimizing a rail network. But that’s a challenge when the network cuts across multiple players who use their own proprietary data and pricing platforms, Jakubowski believes.

“A frontier that has yet to be addressed is how do you take PSR principles and apply them so that they mean something to customers and you do it in practice with partners,” including the short lines, he says.

Taking the next step

Still, Anacostia has gained some short-haul business that exceeded the company’s expectations as U.S. Class Is have pursued PSR. And as the PSR process continues to evolve, short lines will want to be at the table, Jakubowski says.

The next step in the PSR story? Class Is emphasizing volume growth, short-line industry officials say.

“It seems the trend is that you implement PSR, then shed costs, employees and assets. There’s a big disruption in the network, and you lose some business and volume,” says ASLRRA’s Baker. “Then you get your service where it needs to be, you catch your breath, and you pivot to growth. And I think we need to get to that point as quickly as possible.”

The Class Is’ embrace of PSR eventually will evolve into a positive development for short lines, Baker believes.

“We’re optimistic that we’ll see less of the negatives over time,” he says. “If we have a better network and service to sell, that gives us lots of positives for the long haul.”