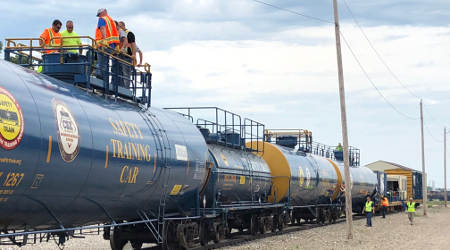 It’s been five years since the tragic derailment in Lac-Megantic, Quebec, that claimed the lives of 47 people. The disaster, which took place July 6, 2013, destroyed much of the small town’s downtown core after a Montreal, Maine & Atlantic Railway crude oil train derailed and exploded.

Since then, the short-line industry has been making a concentrated effort to improve hazardous materials safety. Established in 2015, the Short Line Safety Institute (SLSI) is leading that charge.

The American Short Line and Regional Railroad Association (ASLRRA) partnered with federal officials to create the institute with a goal of assessing safety culture among short lines and regionals that transport crude oil.

After performing more than 50 safety culture assessments, SLSI in late May rolled out a Hazardous Materials Instructor Training program that covers everything railroaders need to know about hazmat shipping, from paperwork requirements to placarding and emergency procedures. The program is designed to supplement a railroad’s existing training protocols, says Executive Director Tom Murta. 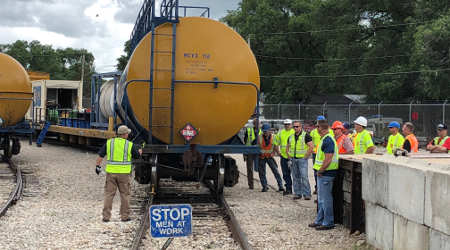 SLSI received a $500,000 federal grant to establish the program in August last year.

The program comes in two flavors: instructor training — that is, working with top-level employees who will go on to train others at their railroad — and direct training, which involves educating all rail employees that are required to be trained under federal regulations.

The training is provided free of charge to ASLRRA members.

And in late May, the institute held its first direct training program for New York and Atlantic Railway (NYA) employees in Yephank, New York.

“The third-party trainers offer firsthand knowledge to participants that reinforces that safety on the railroad begins with them,” he said, adding that he “wholeheartedly” recommends the program for other short lines and regionals.

That extra training, held in May and June, gave NYA leaders the chance to “forge lasting relationships” with local emergency responders, Bonner said. As part of the first responder training sessions, participants learned about rail-car design, rail safety, emergency response procedures and the best ways to work with NYA in the event of an incident.

Meanwhile, SLSI is gearing up for more hazmat instructor trainings in the near future.

“Most of the training we’ll do in this funding cycle will be the train-the-trainer variety,” says SLSI’s Murta.

And each session can be catered to an individual railroad’s needs or concerns. For example, SLSI can cover safety considerations for a specific commodity that a railroad regularly handles.

The training sessions also cover ways to safely inspect a hazmat car being picked up from a shipper or at an interchange.

“It’s long overdue,” he says. “We really hope we can continue for years to come.”