The short-line holding company that the late Guy Brenkman built and nurtured his way has surpassed the three-decade mark. Pioneer Railcorp marked its 30th anniversary earlier this year.

Brenkman, who died in September 2013, founded the company in January 1986 as Pioneer Railroad Co. He later acquired its first property: an 18-mile leased line in Salem, N.J. The company renamed it the West Jersey Railroad and operated the short line until the mid-1990s.

Pioneer Railcorp — the name adopted in the early 1990s to reflect a bigger and more modern company — now owns 17 short lines and six other rail operations in 12 states that operate nearly 600 miles of track and serve more than 100 customers. Headquartered in Peoria, Ill., the firm manages the railroads through its Pioneer Lines subsidiary.

A fourth-generation railroader from Peoria, Brenkman spent seven years switching cars for the Toledo, Peoria & Western Railway, and many more years acquiring and renting real estate properties before he founded Pioneer. He had railroading in his blood and had always dreamt of owning and managing his own railroad company, says Betty Brenkman, his widow. 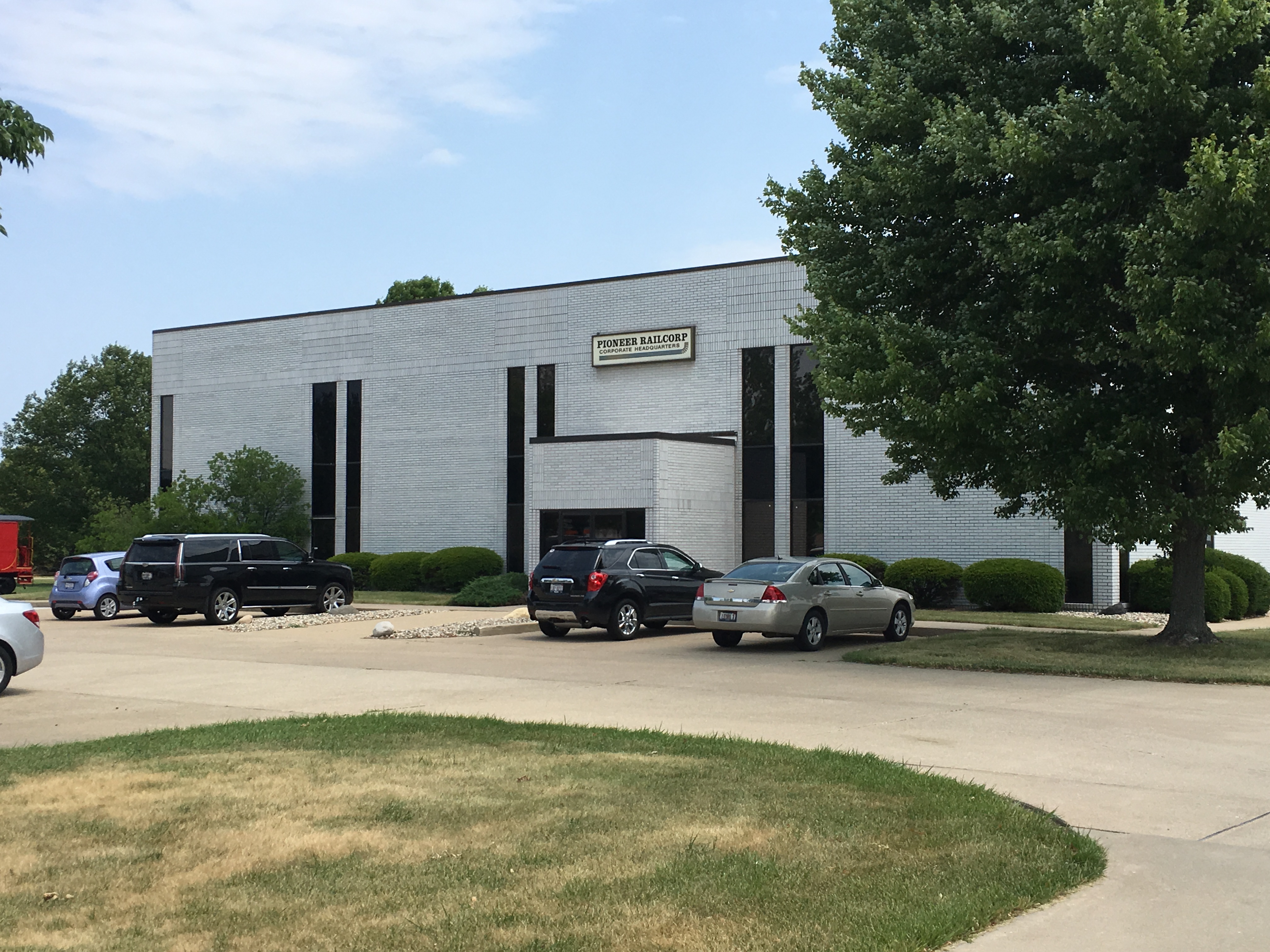 Pioneer Railcorp currently is headquartered in Peoria, Ill., but the company previously was stationed in New Jersey and Arkansas. Photo: Jeff Stagl

In the mid-1980s, Guy Brenkman was acutely aware of the high number of unprofitable lines that were being spun off from Class Is because of the Staggers Act and rail industry deregulation.

“Guy saw what was happening in the short-line industry and embraced it,” says Betty Brenkman.

The question he sought to answer was: How do you raise the necessary capital to form a company and acquire a line? Brenkman’s first acquisition attempt, a deal to purchase a Burlington Northern Santa Fe line in western Illinois, fell through in part because of financing.

So, after attempts to convince bankers to underwrite the formation of his company — which ultimately were rebuffed because he owned no railroads, had no railroad management experience and declared bankruptcy during his real estate days — Brenkman organized his own private stock placement to raise money for an initial public offering (IPO). He sold $1 shares at county fairs, Peoria-area businesses and trade shows.

By October 1988, the IPO had generated $235,000, attracting 1,800 investors in 41 states. Some of the funds were used to swing the West Jersey Railroad deal. Pioneer’s stock later split.

In June 1993, Pioneer shares began trading on the Chicago Stock Exchange. Pioneer was the first short-line holding company to be traded on a stock exchange, says President and Chief Executive Officer J. Michael Carr, who joined the firm in March 1993 as controller. Brenkman rang the bell at the exchange to mark the event.

“Our stock later became part of the NASDAQ small-cap listings,” says Carr, who worked in public accounting and banking prior to joining Pioneer, where he eventually served as chief financial, treasurer and president under Brenkman.

Then, in 2005, the company went private. The timing was good because Pioneer would have had a hard time continuing to comply with public company accounting and reporting reforms mandated by the Sarbanes-Oxley Act of 2002, says Carr.

Before he retired in 2006 and handed the reins to Carr, Brenkman generated enough capital to acquire more than a dozen short lines. He targeted small railroads that were privately owned by individuals, or families who grew frustrated with generating enough business to survive or complying with ever-increasing federal safety regulations.

“He would call them up and ask, ‘Do you want to sell your railroad?’” says Pioneer General Counsel Dan LaKemper, who worked with Brenkman for many years and has served the company since its early days.

Brenkman would chat a long time with a short line’s owner about his or her business or meet for hours over cups of coffee. He sometimes would stay up all night figuring out a bid for a short line, says Orvel Cox, a current board member and former Pioneer manager who had worked with Brenkman from Day 1. 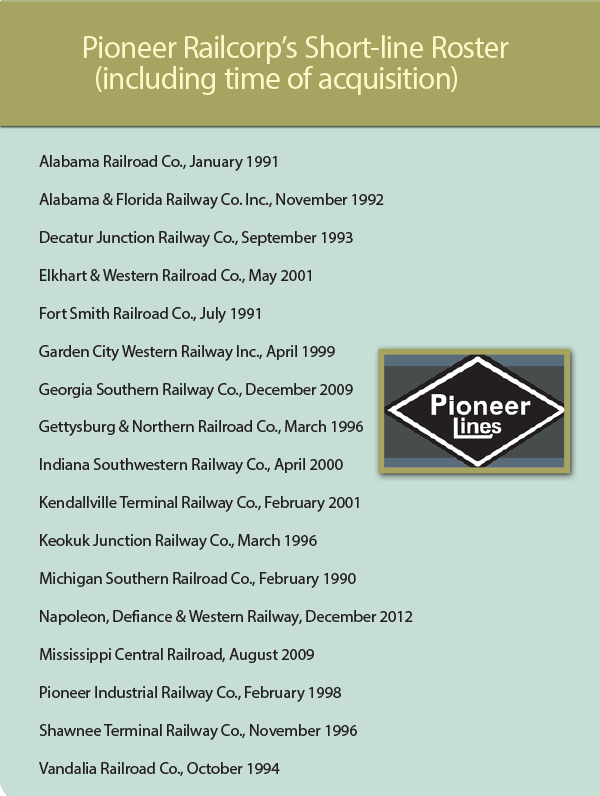 “He put his heart and soul into it,” says Cox.

Despite Brenkman’s best efforts, not every acquisition turned out to be a good one. In December 1994, Pioneer acquired the Minnesota Central Railroad Co., a 94-mile short line in southern Minnesota. The railroad’s track was in such deplorable condition, it almost broke the company to address it, says Carr.

After only three years, Pioneer sold the Minnesota Central to Southern Rail Resources Inc. for $1 and the assumption of debt.

A highly respected entrepreneur among his peers, Brenkman put his entrepreneurship to the test in other ways, as well. In 1993, he formed a subsidiary that — at the time — did something that was considered unusual and risky in the short-line industry: buying and leasing locomotives and cars. Pioneer Railroad Equipment Co. Ltd., which at its peak had 1,500 cars in its fleet, still is going strong and currently holds 100 locomotives and 400 cars, says Carr.

“Guy liked to buy and sell things,” he says. “He bid on used equipment and got the financing for it.”

Pioneer became successful because Guy was dedicated to the company and he teamed with good, like-minded people to help him run it, says Betty Brenkman.

“Guy surrounded himself with people who had the same passion as he did,” she says.

In the 10 years since Guy Brenkman retired — although he remained involved in the company for years as a board director until his death — Carr has continued to count on a strong management team and his business acumen to try to keep growing the company. To that end, a purchase deal swung in late 2012 under Carr’s watch turned out to be both a financial blessing and curse for Pioneer.

The company bought the former Maumee & Western Railroad Corp. line, which runs 51 miles from Woodburn, Ind., to Liberty Center, Ohio, for $5.4 million and renamed it the Napoleon, Defiance & Western Railway. Pioneer acquired the line with the full knowledge that it was in dire need of rehabilitation to provide consistent service to current and potential customers, says Carr.

“It made the Minnesota Central’s track look like a Class I line,” he says.

Pioneer so far has spent $5 million on track improvements — nearly matching the purchase price — and is trying to land a federal Transportation Investment Generating Economic Recovery grant to help fund more, says Carr. The company has restored the middle portion of the line to offer shippers connections to two Class Is: CSX and Norfolk Southern Railway.

“The track was so bad no one wanted to buy it,” says Carr. “But the line’s potential is so great.”

When he told Brenkman about the Maumee & Western line prior to executing the deal, the former leader was excited about it because of the business the line could generate, says Carr.

The company reached the milestone in January 2016. Source: Pioneer Railcorp

But that was Brenkman in a nutshell, going all-in on a number of deals that ultimately became lucrative for Pioneer over that past 30 years, his former co-workers and widow say. After Brenkman died, a Progressive Railroading reader wrote the following comments about him in response to a news item about his passing: “Guy was amazing. In an era where people look for the quick buck in new technologies, he had the vision and foresight to build a unique and solid enterprise. Long before Warren Buffett was looking at the railroad industry, Guy was building an enduring business.”

To ensure Pioneer remains an enduring enterprise, Carr knows he can’t rely solely on the methods of the past. Continuing to grow the company via acquisitions likely will prove difficult because there are fewer candidates these days, he says. So, offering new services could help do the trick revenue growth-wise, such as locomotive and car repairs, maintenance-of-way work or bridge inspections, Carr believes.

The management team’s charge: to keep finding ways to channel Brenkman’s devotion to his company, short lines and the rail industry at large in their business dealings.

“The company was like his child because he had no kids. It was his baby,” says Carr. “We need to continue to manage it like that.”