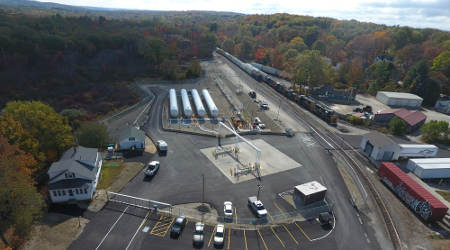 Not much has changed for the Grafton & Upton Railroad (G&U) since it was formed in 1873. The short line has only had three owners and has remained independent in that 145-year span, and hasn’t acquired or built more track in addition to the 16 miles it manages in central and eastern Massachusetts. Until recently, the railroad hadn’t done much in the logistics realm, either.

But G&U Chief Executive Officer Jon Delli Priscoli has tried to elicit change with both the operational and business approach since he bought the short line in 2009. First, he strived to restore service to the 16 miles of track between Grafton and Milford because half of it had been inactive for a number of years. Then, he sought to take advantage of G&U’s location near several interstate highways and its strong relationship with interchange partner CSX to build logistics and transload business.

In 2010, Priscoli’s efforts led to the creation of a rail-to-truck logistics center in Upton with nine tracks and an integrated logistics center in Hopedale that features warehousing capabilities. In addition, he had a hand in forming G&U Logistix to provide supply chain solutions through integrated logistics, multimodal freight transportation and other services, enabling G&U officials to claim they managed the only independent short line in the region offering a full suite of third-party logistics services.

And now — after a nearly six-year legal fight with local opponents — Priscoli’s perseverance has resulted in a propane transload facility in Grafton that has the potential to significantly increase G&U’s traffic. Designed to store up to 320,000 gallons of liquid propane, the facility launched operations in January.

Priscoli first proposed the open facility — one that isn’t bound to a single supplier — in 2012 because domestic propane production was booming and the closest similar terminal is located about a three-hour drive away in Selkirk, New York. He wasn’t interested in establishing a closed facility that’s only accessible to certain wholesalers and shippers because it has less user- and traffic-growth potential.

“I saw the need for an open facility,” says Priscoli. “So, we bought and developed the property, and built it. We own it and we provide the logistics.” 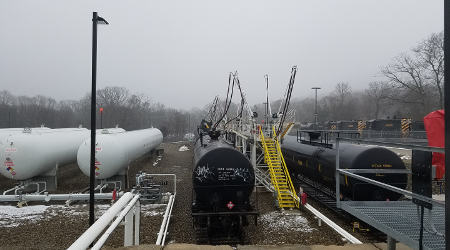 Although it’s somewhat unusual for a short line to develop, own and manage a transload facility, Priscoli relied on his real estate background to bring the project to fruition. For more than 36 years, he has served as a developer specializing in commercial and industrial real estate.

“I’m a developer who owns a railroad, and not the other way around,” he says. “You have to make the opportunities [happen].”

But the propane facility almost didn’t happen because the town of Grafton filed a lawsuit claiming the transloading of the flammable liquid gas posed a safety hazard to nearby homes, an elementary school and other places where people congregate. Priscoli argued that the facility would have state-of-the-art safety measures in place that exceed local, state and federal requirements to prevent an accident and control any fire.

The facility features motion and gas sensors; cameras; a state-of-the-art security system; 24/7 surveillance and monitoring systems; a fire suppression system with four remote-controlled water cannons capable of covering the entire terminal; and remote shut-down functions via a tablet. In addition, local police are provided surveillance and monitoring capabilities, and remote access to the facility if necessary.

G&U eventually won cases in state, federal and appellate courts, and received a favorable ruling from the Surface Transportation Board that enabled construction to continue on the facility after progress was stalled for several years by the town’s successful cease-and-desist order.

“We always want to work in the community we do business in, but we don’t want them to tell us how to run our business,” says Priscoli.

He believes the terminal now is the most automated propane facility in the nation. 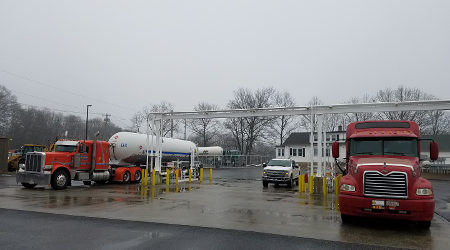 Liquid propane gas is railed by CSX and other railroads from points in the Dakotas, Oklahoma and Pennsylvania to the Grafton terminal. The fuel then is transferred to 18-wheel trucks for local deliveries. Loading times at the terminal are scheduled to reduce idling and prevent trucks from clustering on local roads.

G&U — which only handled 40 carloads in 2009 after Priscoli bought the short line — expects to handle 5,000 carloads in 2018, with 1,500 generated by the propane facility. Going forward, the Grafton terminal likely will continue to help drive traffic, Priscoli believes.