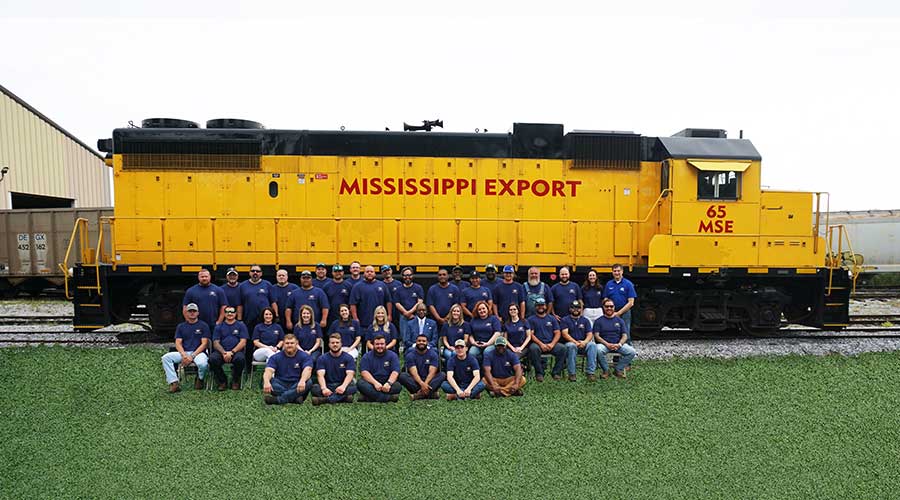 As the Mississippi Export Railroad (MSE) celebrates its 100th anniversary this year, the short line’s CEO Kate Luce says it’s a time to reflect on the railroad’s past — and plan for the future.

“What 100 years means is … it's a time to reflect on the successes that we've had in the past, and the team, most importantly, that created those past successes,” Luce says.

The railroad was founded in 1922 by Luce’s great-great grandfather, Gregory Luce. Before he purchased the short line and rechristened it “MSE,” it was known as the Alabama & Mississippi Railroad, so named in 1915. Before that, it had been called the Moss Point & Pascagoula Railroad Co. since 1894.

From there, the railroad’s helm was passed down from generation to generation: J.H. Luce took over as president and chairman in 1935, Dwain Luce in 1958 and D. Gregory Luce Jr. in 1986. Kate Luce became MSE’s president and first CEO in 2017.

Along the way, the Luces all worked toward common goals: to improve safety, recruit good people and partner with southern Mississippi’s communities, Kate Luce says. All in the name of making the region a better place.

“We're a short-line railroad, so we like to do a little bit of everything for our customers,” she says. “We go from being just a service provider, just a vendor, to being a partner.”

Headquartered in Moss Point, Mississippi, the railroad hauls such commodities as coal, wood pellets and liquefied petroleum gas across 42 miles of track between Pascagoula and Evanston. The short line interchanges with four Class Is — CN, CSX, Kansas City Southern and Norfolk Southern Railway — and handles switching operations with the Terminal Alabama State Docks and Port of Pascagoula.

In 1940, MSE became one of the first railroads in Mississippi to acquire a diesel-electric locomotive; six years later, it purchased the only locomotive produced by Ingalls Shipbuilding, a primary producer of U.S. Navy ships, according to the short line’s website.

MSE was featured in the CBS television show On the Road with Charles Kuralt, a program that aired from 1967 to 1980 and focused on America’s rural roads. Kuralt discovered the railroad’s gandy dancers, the chanting repair crews who used to work along the tracks.

Throughout the 1990s, MSE worked to develop the Helena Industrial Park, a 125-acre site owned by MSE and located adjacent to the rail line. With flagship tenants Tindall Corp. and Airgas, the site includes a 40,000-square-foot warehouse and connections to CN, CSX, KCS and NS. The park was recertified as “project-ready” in 2016 and named a CN rail-ready site in 2021.

In 2013, the railroad completed construction on the Escatawpa River Terminal, a 9.5-acre site that allows for five to seven car spots per switch and storage of more than 600 freight cars. It also offers two standard barge spaces with a 14-foot draft on the Pascagoula River, which leads to Pascagoula Harbor and the Intracoastal Waterway, a shipping route that extends 3,000 miles across the Atlantic and Gulf Coast shores.

Luce wasn’t always sure she’d make rail her career. She studied business at Auburn University and worked for a summer at MSE doing clerical duties. That summer sparked her interest, she says.

Luce changed her field of study, enrolling in Auburn’s supply-chain management program. After graduating in 2009, she was named MSE’s transportation manager later that year.

To “expand her horizon,” Luce went back to school at Duke University for her MBA in 2013, completing the program in 2015. She left the railroad for three years to do consulting work and returned to MSE as chief operating officer in 2016. The next year, she was named the railroad’s first female president and CEO.

“I've been lucky to have great mentors and great teachers, and those people encouraged me to follow my heart and come back to the business,” Luce says. “I set some pretty big goals for what I wanted to accomplish.”

One of those mentors is Mark Miller, who served as the railroad’s vice president of operations until he retired last year.

There are few female short-line leaders out there. But beyond gender, leading a short line is all about rolling up your sleeves and committing to bringing value to the business, Luce says.

“It's neat as a woman to see more women contributing to railroading,” she says, adding that we “need a lot of smart, smart minds on [our team], whatever form that takes.”

“A lot of what we do, as we look to the future, is figuring out how to put together the pieces of this puzzle,” Luce adds.

The piecing-together process requires re-examination on occasion. What’s worked in the past or is working now may not work tomorrow, so it’s important the MSE team doesn’t become complacent, Luce says.

Simply going with the tide isn’t an option.

“We want to create that momentum within ourselves and within our business," Luce says.

What is the railroad doing to kick it up a notch? Investing heavily in its rail-car repair side business; building its first railroad subsidiary; and expanding operations in warehousing, port access and transloading.

Meanwhile, MSE’s only subsidiary, the Alabama Export Railroad, began operations on just over 12 miles of track in downtown Mobile in 2019 and will continue to expand its connections to the Port of Mobile. MSE is also slated to bring a new car-repair facility online in 2024.

"Something my dad has always said to me is that change does not guarantee improvement, but improvement rarely comes without change,” Luce says.

Luce’s father has been a monumental influence on her leadership style. He taught her “people are the future of business,” she says. It’s also about corporate sustainability, and not just the environmental kind. Bringing in good people is key to making the business stronger and more diverse, Luce says.

Email comments or questions to grace.renderman@tradepress.com.