In summer, Florida Central Railroad (FCEN) will finish the largest trackwork project in its 28-year history.

The 68-mile short line is nearing completion on an $18.4 million project that involves upgrades and repairs to 57 miles of track between Orlando and Umatilla, Fla., including a branch line between Toronto and Winter Garden, Fla. The project — which began in October 2013 — calls for installing 20 miles of continuous-welded rail, replacing 23,100 ties, rehabilitating 25 grade crossings, repairing bridges and completing other right-of-way improvements, such as surfacing and ditching.

Owned by Pinsly Railroad Co., FCEN began pursuing the project in the mid-2000s to bolster its primary route. The Florida Department of Transportation (FDOT) approved funding for track upgrades between Orlando and Tavares in 2005. A year later, FCEN officials approached the department about backing additional improvements between Orlando and Eustis.

The entire project was adopted into FDOT’s work program in 2010, with the state set to cover 75 percent of the costs ($13.8 million) and construction scheduled to start in 2011.

But it took FCEN two years to gather the required local match of $4.6 million due to the sheer number of public partners involved in the project. The short line formed a public-private partnership with nine public entities — an unusually high number of parties coming together for a regional transportation project, says Pete Petree, vice president of Pinsly’s Florida Region.

The public partners are Lake and Orange counties, and the cities of Apopka, Eustis, Mount Dora, Ocoee, Orlando, Tavares and Winter Garden. FCEN needed to explain the project’s implications and benefits to leaders of each entity, then wait for each to approve their share of the local match, says Petree. The rail line parallels often-congested U.S. Highway 441, a six-lane corridor that’s a key northern route to Orlando, he says.

“We showed them how the project would help the region grow, generate jobs and [foster] economic development,” says Petree. 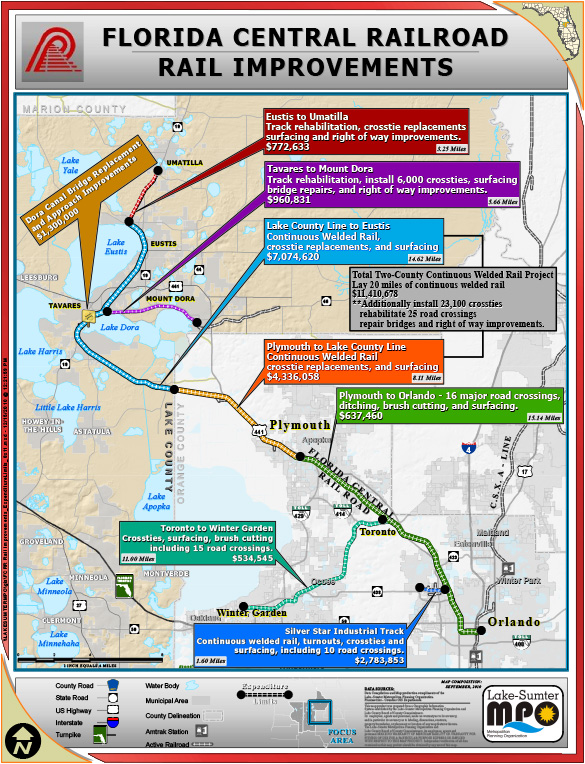 According to FDOT’s initial analysis of the project’s benefits, more than 40,000 truck shipments would be diverted to rail annually; 285,000 square feet of new business and 65 non-rail jobs would be created; and auto trips averaging 1,600 miles would be reduced in travel time by 286 minutes. The project was projected to yield $238 million worth of public benefits over a 20-year period.

In addition, the upgraded line could host a SunRail extension if a decision is made to provide the new passenger-rail service through the nine cities and two counties, says Petree. A commuter-rail system under construction in Central Florida, Sunrail plans to open its first phase in spring and second phase in 2016. The potential passenger-rail component intrigued some of the public partners, says Petree.

Although FCEN and the Lake-Sumter Metropolitan Planning Organization essentially quarterbacked the project and fund collection, the city of Tavares played a major role in securing the local match, he says. The city helped land a $2.2 million Rail Line Relocation Program grant from the Federal Railroad Administration last year, reducing to $2.4 million the funds that would need to be divvied up by the other local partners.

“Here, a small, progressive town shared that grant with large players like Orlando and Orange County,” says Petree. “It showed what a great partner we have in Tavares.”

FCEN stands to derive its own benefits from the partnership-driven project. Some track that’s out of service will be revived to increase opportunities for economic development, and other track with a current 10 mph speed limit will be bolstered to accommodate 25 mph train speeds, says Petree. In addition, the line will feature all welded rail — replacing some 1920s-vintage rail — that can support unit-train traffic. FCEN might be able to attract unit trains of aggregates or construction materials, “which are big in Florida,” says Petree.

But first, the project needs to reach the completion stage. About 90 percent of the work will wrap up by April’s end after only about six months of construction, says Petree, adding that a 12- to 18-month project schedule originally had been anticipated. Some crossing work will still need to be performed in spring and summer according to each city’s needs, he says.

The project was accelerated due to the efforts of the contractor, R.J. Corman Railroad Group, and the timely securement of materials, says Petree. Since the work is being performed in Florida, R.J. Corman was able to reassign resources from other parts of the United States that are enduring brutal winter conditions, he says.