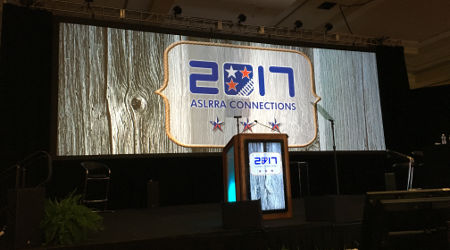 “It is what we do, how we work and how our supplier members conduct business. In short, it’s how we roll,” wrote ASLRRA President Linda Darr and 2017 Convention Chair Norma Torres in the convention program’s introductory letter.

This year’s Connections gathering drew more than 1,500 attendees and 250 exhibitors to the Gaylord Texas Resort in a Dallas/Fort Worth suburb. The association retooled the annual event — based on feedback from prior conventions — to make the 2017 iteration more interactive and engaging, yet still highly educational, wrote Darr and Torres, the Brownsville & Rio Grande International Railway LLC’s president.

The topics covered at the conference ran the gamut from safety to technology to legislation to marketing. Darr cited technology during her address at the first general session held April 24.

“We need to get on the technology train, or be left at the station,” she said, mentioning the evolution of Big Data, which provides tools that enable businesses “to be smarter at what they do.”

ASLRRA President Linda Darr at 104th conference: Big Data provides tools that allow you to be smarter at what you do. #aslrraconnections pic.twitter.com/Rx4VSQqQgV

The Short Line Safety Institute (SLSI) drew mentions during the conference, as well. Formed by the association in 2015 to help enhance regionals’ and short lines’ safety programs, the SLSI has assessed the safety culture at 28 small railroads impacting 3,000 employees, said ASLRRA Chair Judy Petry, Farmrail System Inc.’s president and GM. SLSI Safety Program Manager Michele Malski — who was named one of Progressive Railroading’s Rising Stars for 2017 — later added that the institute recently launched a number of resources on hazardous materials.

In terms of ASLRRA’s legislative pursuits, the short-line industry still faces an urgent need to permanently extend the Section 45G tax credit, said Darr. The industry can take advantage of the Trump Administration’s hard stance on relieving regulation and easing taxation, she said.

The Building Rail Access for Customers and the Economy Act (H.R. 721), or BRACE Act — which proposes to permanently extend the the 45G tax credit — was reintroduced earlier this year and continues to garner support on Capitol Hill, said Chambers, Conlon & Hartwell LLC partner Adam Nordstrom during an April 24 breakout session. Although lobbying remains a work in progress, the BRACE Act at that time had scored 156 co-sponsors in the House and 34 in the Senate, he said.

“The battle will be in the Senate,” said Nordstrom, referring to the challenge of gaining a simple majority of 51 to back the bill amid some skeptical senators.

CCH's Adam Nordstrom at breakout session: BRACE Act that would make 45G tax credit permanent has 156 co-sponsors in House and 34 in Senate. pic.twitter.com/JxSdZPjj6u

The short-line tax credit also was addressed April 25 during an administration 90-day report card discussion moderated by Nordstrom. Rep. Blake Farenthold (R-Texas) questioned whether it would benefit short lines more to gain the permanent tax credit or a drop in the corporate tax rate.

The regulatory environment came up during the discussion, too. Progressive Railroading columnist and independent rail industry analyst Tony Hatch said he wasn’t convinced that less regulation is “on the administration’s mind” given other priorities, such as a health-care bill and infrastructure budget.

Tony Hatch: I'm not convinced that less regulation is on the Administration's mind. #aslrraconnections pic.twitter.com/LWW36M1PIj

There’s less and less communication among the marketing officers at railroads, but there needs to be more of it to maintain and build interline business, said Maples. For McKechnie, it would help if Class Is recognized that short lines collectively are their largest customer so both could work together more collaboratively. He challenged attendees to approach a Class I with “something different or something new” to prompt collaboration.

“Bring ideas — it helps us vet them out,” said McKechnie.

In addition, short lines should be proactive with their Class I partners, in part to address issues before they become a problem, said Sabatini.

Marketing also was front and center among a number of annual awards the ASLRRA handed out during the conference. The association bestowed this year’s marketing awards to the North Shore Railroad Co., Springfield Terminal Railway Co. and Wisconsin & Southern Railroad Co. (read this news item to learn more about the winners, as well as the recipients of the Richard F. Timmons Award for veteran recruitment and the Thomas L. Schlosser Distinguished Service Award).

The ASLRRA also honored Arkansas & Missouri Railroad’s Ron Sparks as the Safety Professional of the Year and Old Augusta Railroad’s Keith LaPorte as the Safety Person of the Year for their career-long commitment to safety compliance and an associated strong culture (read this news item for more info on those awards).

The Jake Awards, Jake Awards With Distinction, President’s Awards and Most Improved Award — which the association typically distributes at its annual conference to recognize regionals’ and short lines’ safety efforts — now will be distributed at the fall regional meetings. The change was made so the winners could be better recognized by their peers, said Watco SVP of Regulatory Relation and Compliance Gary Vaughn, who chairs the ASLRRA’s safety and training committee.

The association plans to release a list of Jake and Jake with Distinction award winners on its website in July. President’s Award recipients will be announced just prior to the fall regional meetings, which will be held in Charleston, S.C., Providence, R.I., and Kansas City, Mo.

Meanwhile, the ASLRRA also bestowed the Susan C. Murray Scholarship to Alexis Jakubowski, the daughter of Anacostia Rail Holdings Co. Chief Commercial Officer Eric Jakubowski. Now in its 30th year, the scholarship program — which is named for the woman who helped launch the association’s successful trade show — provides an award to a daughter or granddaughter of an ASLRRA member.