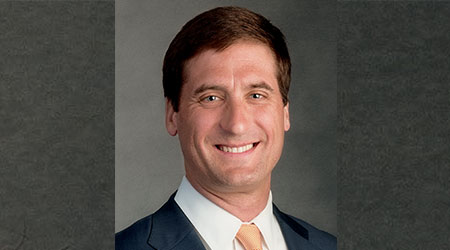 A big-picture guy for whom global dot-connecting seems second nature, Hellmann recognizes that at G&W, he's on a path others paved — one he and his colleagues now are continuing to lay. Hellmann knows that whatever successes this growing short-line holding company has had under his watch, they've been collective successes. Team victories. So it wasn't surprising that Hellmann — the 2017 recipient of Progressive Railroading’s Railroad Innovator Award — didn't talk that much about himself during a late August interview at G&W headquarters. He rarely used the word "I," even when talking about his own life. As Hellmann put it in an email consenting to accept the Innovator award at RailTrends® in New York City on Dec. 1, the award really isn’t about him. He said he'd prefer to "focus the attention as much as possible on my team rather than myself."

And he did just that during the interview. But Hellmann's career rise, and G&W's growth during the past decade since he's taken the reins, speak for themselves.

After serving a couple of corporate finance stints in New York City and Tokyo, Hellmann joined G&W in 2000 as chief financial officer. In 2005, he was promoted to president; in 2007, G&W added "CEO" to his title. On May 24 of this year, Hellmann was named chairman, succeeding Mort Fuller, who retired. Fuller had been G&W's CEO for 30 years and chairman for 40.

"Jack, one of the most respected men in transport, has built upon Mort's legacy to create what had been since the '80s the 'Holy Grail' for short-line entrepreneurs — the truly large-scale, global short-line holding company," says Tony Hatch, an independent transportation analyst and consultant, and program consultant for Progressive Railroading's RailTrends conference.

"When you have the diversity of rail platforms that we have in the U.S., Australia and the U.K., the number of directions you can grow is significant," he says.

A recognition that dots connect globally might have been a valuable lesson Hellmann learned early in life growing up in Seattle.

Hellmann's father is a professor/Japan expert at the University of Washington who's still teaching at age 84. Hellmann's mother is an artist/geographer who penned a paper about railroads unlocking the grainbelt in San Francisco.

To further broaden his education, Hellmann attended college in the East: A 1992 graduate of Princeton University's Woodrow Wilson School of Public and International Affairs, he wrote a 140-page senior thesis on Japanese investment in Southeast Asia.

Hellmann later earned an MBA from The Wharton School at the University of Pennsylvania and a master's degree in international relations from the Johns Hopkins School of Advanced International Studies with a concentration in China Studies.

Hellmann's studies served as a foundation for his first job with paper industry giant Weyerhaeuser Co. in Tokyo, where he wrote political, economic and industry reports. He also interned at Weyerhaeuser in Beijing before taking a corporate finance gig with Schroder & Co. in 1996. A British merchant bank with an investment office in Shanghai, Schroder also had an investment banking arm in New York City that served the transportation group.

Hellmann's boss at Schroder was Eric Schless, who founded the company's transportation group. During his tenure there, Hellmann also met Gary Yablon, Schroder's managing director overseeing transportation-related equity research. Even though Hellmann was on the banking side, Yablon became a mentor.

"That's how I got to know transportation," Hellmann says.

Including the rail industry. He was part of due diligence teams that worked on finance projects for Kansas City Southern and Union Pacific Railroad. Hellmann saw how railroads, particularly small railroads, connected dots — and how they could connect even more.

"Only in the economy of the United States can you have an industry like short lines," he says. "They're in the nooks and crannies."

There also was his interest in geography. Hellmann started to love studying the locations where railroads operated, and the economy of the regions railroads served. He wondered about what was important to people in those communities.

"It required an understanding of the economics and the public policy in it," Hellmann says. "It's infrastructure and railroads are part of it."

'It was total serendipity'

In early 1999, Hellmann left Schroder to join investment banking firm Lehman Brothers Inc.'s emerging communications group. While there, his former boss Schless contacted him with news about a potential job: CFO for a "dot-com" company in San Francisco, Hellmann says. He and his wife were happy in the Big Apple and didn't want to relocate to the West Coast. But there was, as he says he told Schless, this "cool little company" based in Connecticut that he would be interested in signing on with someday: G&W. Hellmann had met Mort Fuller and other G&W execs, and liked what they were building.

"Eric ended up calling Mort Fuller and it was total serendipity — G&W had been looking for a CFO," Hellmann says. "Twenty-four hours later, Mort Fuller called and we met for breakfast."

The two hit it off and "literally had a handshake deal," Hellmann says.

After joining G&W as CFO in early 2000, he hit the ground running.

"We were still a micro-cap stock, but a huge opportunity was presented to us in Australia," Hellmann says. "Mort said, 'We've got to figure out how to do this.'"

They did. In 2000, the company acquired Westrail Freight — the freight operations of the state-owned railroad — from the Western Australian government. The acquisition was made by the Australian Railroad Group Pty. Ltd., a 50-50 joint venture G&W formed with Wesfarmers Ltd., a $2.5 billion, Perth-based company. The deal helped build on the diversified firm’s 1997 investment in the newly privatized Australia Southern Railroad.

"We were able to put together a very complex transaction," Hellmann says. "That Australian transaction took us from being sort of an orphan stock to one where people looked up and said, 'Those guys are really doing some interesting things.'"

Fuller, then G&W's chairman and CEO, noted Hellmann's and others' contributions to the Australia deal in the company's 2000 annual report. Hellmann "established aggressive goals for financial performance and arranged a series of corporate finance transactions to strengthen our capital structure," Fuller wrote.

During the next five years, Hellmann continued to help refine G&W's goals and fine-tune its finances as the company refocused on U.S. short-line acquisition opportunities. The company eventually acquired about two dozen properties.

And the more he spent time on those properties with his G&W colleagues, the more Hellmann relished the path he'd taken.

"The greatest part of my job is being in the field talking with people about the work they do," he says. "There is so much there to learn from them. We just have terrific people."

Still on the acquisition beat

Major transactions completed under Hellmann's watch include the purchase of Rail Management Corp. and its 12 railroads in 2005; Ohio Central Railroad System and its 10 short lines in 2008; the Tarcoola-to-Darwin rail line in Australia in 2010, and the acquisition of RailAmerica Inc. and its 45 regionals and short lines in 2012.

"There's been a natural evolution from mom-and-pop enterprises taking on properties that were left for naught ... to short-line holding companies bolting on 45 railroads and doubling in size," Hellmann says. "And the M&A game is truly a team sport."

Team G&W is still on the acquisition beat. The company purchased a 94 percent stake in Freightliner Group Ltd. in 2015, then acquired Providence & Worcester Railroad Co. in 2016.

The company's been active this year, as well. In February, G&W announced it had agreed to acquire Atlantic Western Transportation Inc., the parent of Heart of Georgia Railroad Inc. And in May, its subsidiary GWI UK Acquisition Co. Ltd. completed the acquisition of Pentalver Transport Ltd. from APM Terminals.

Hellmann credits G&W Executive Vice President of Global Corporate Development Matt Walsh for leading the charge with some of the more complex transactions. Walsh has been with the company since 2001.

A laser focus on safety

Another element of G&W's success is its laser focus on safety. Since Hellmann took G&W's reins, he's nurtured the strong safety culture Fuller fostered. G&W employees have done the rest. For example:
• In 2009, the Willamette & Pacific Railroad became the first G&W railroad to receive the E.H. Harriman Gold Award for the best safety performance among U.S. railroads in the 250,000-to-4 million man-hours category. The Willamette & Pacific also received two President’s Awards from the American Short Line and Regional Railroad Association (ASLRRA) for best safety performance and most injury-free man-hours in 2008.
• In 2010, the Buffalo & Pittsburgh Railroad earned the Harriman Gold Award for best safety performance of any U.S. railroad in the 250,000-to-4 million man-hours category, as well as two ASLRRA President’s Awards for best safety performance and most injury-free man-hours. The railroad won it the next two years, as well.
• In 2013, Susie Klinger, Tomahawk Railway L.P.’s operations manager, became the first employee of a G&W railroad to be named Safety Person of the Year by the ASLRRA.
• In 2015, Mike Lundell, G&W's vice president of compliance and safety, became the second G&W employee to receive ASLRRA's Safety Professional of the Year award.
• In 2016, Teddy Maybrier, G&W's VP of safety and training, earned ASLRRA's Safety Professional of the Year honor.

Also in 2016, 98 G&W railroads recorded no injuries. And the firm's worldwide operations registered an employee injury-frequency rate of 0.73 per 200,000 man-hours, a 33 percent year-over-year improvement and a mark that shows the company is "safer than any Class I railroad for the eighth-straight year," as Hellmann noted in his 2016 letter to G&W shareholders.

Hellmann hopes the continuous improvement on the safety front is due at least in part to employees knowing they’re in an organization "where good ideas can come from anywhere and will percolate up," and ultimately be acted on, he says.

"Short lines are good at developing that kind of environment," Hellmann adds.

So are organizations helmed by leaders who listen. Hellmann’s a listener, colleagues and observers (including this reporter) have said and written. Listening inspires trust, and trust needs to be present for constructive dialogue to occur. And with dialogue comes informed decision-making.

As Fuller noted in his final letter to shareholders as G&W chairman earlier this year: "In the 17 years since Jack joined us and the 10 since he succeeded me as CEO, we've had long discussions and never a disagreement. I am confident and enthusiastic about G&W’s course."

So is Hellmann, who says it's been an honor "to carry on the core values, entrepreneurial spirit and ethical business practices" that Fuller instilled.

Hellmann also says that when he accepts the Railroad Innovator Award next month, he intends to give credit where it's due: to Team G&W.

Email comments or questions to pat.foran@tradepress.com