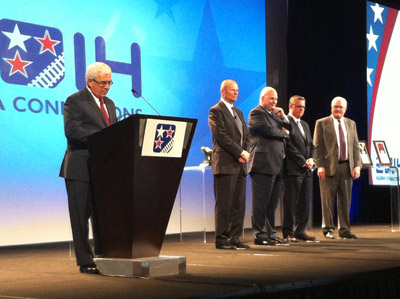 The strong showing pleased conference organizers while many of the attendees likely were gratified with the topics covered during the event’s presentations. Safety, crude-by-rail (CBR), BNSF Railway Co.’s service recovery and regulatory developments were just some of the pressing issues the speakers addressed.

At the April 24 general session, BNSF President and Chief Executive Officer Carl Ice provided an update on the Class I’s efforts to boost operational performance after one of the worst winters on record. Performance issues should be resolved by the end of the second quarter, Ice said during his keynote address.

Broad-based traffic growth that occurred last year and into 2014 in several commodities — such as coal and agricultural products, and “not just crude oil” — slowed velocity on the railroad, he said, adding that the harsh winter aggravated train-speed issues. BNSF currently is operating 20 percent more locomotives than at this time last year and is “making velocity improvements every day” to boost service even as traffic continues to increase, said Ice. The Class I recently logged 200,000 units in a week for the first time since 2007.

“We say railroading is a momentum business,” said Ice, adding that the drive to improve service ultimately will benefit all BNSF customers.

In addition, the Class I is willing to invest high amounts of capital to help boost service, including this year’s record-setting $5 billion capex budget, said Ice. The budget includes funds to hire 5,000 workers, add 500 locomotives and acquire 5,000 rail cars.

Proof of BNSF’s longstanding commitment to capital investments? Since 2000, the railroad has reinvested more than $45 billion, said Ice.

“We’re there for the long term,” he said.

For example, continuing to stress the Confidential Close Call Reporting System and other programs that provide data on safety issues before an accident occurs is “the future of rail safety,” said Szabo. The close-call program alone has helped reduce accidents 70 percent, he added.

In terms of CBR safety, there isn’t “one silver bullet” that could solve the various issues, said Szabo. The industry needs to advance to the next level of safety, he believes. To that end, the FRA recently proposed a rulemaking that would require a minimum of two-person crews on all crude trains. Input received during the comment period will help mold the rule, said Szabo.

There is an “emotional discussion” going on now about improving tank cars that was brought about by the recent derailments and accidents, said OmniTRAX’s Shuba. A stricter tank-car standard would be a help to Patriot Rail because it would reduce the company’s risk, cost exposure and insurance expenses, said Fenton.

“CBR is here to stay. We see models shift and supply chains change, but our view is it’s a growing market,” said Genesee & Wyoming’s Miller.

However, there isn’t enough infrastructure in place on the West Coast to support the growth of CBR, even for the export of Canadian heavy crude, said Fenton.

Although 10 million barrels of crude is produced each day and projections show daily production reaching 20 million barrels in five to seven years — figures that “bear out the tremendous opportunity for rail in the energy space” — the age of natural gas “will dwarf crude,” said Watco’s Webb.

“And we don’t understand what the infrastructure needs are [for natural gas],” he added. 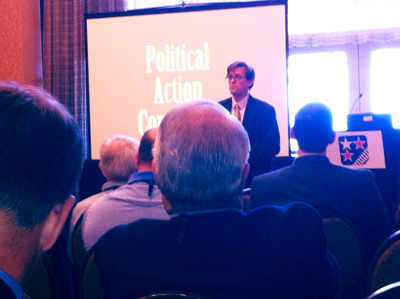 The Section 45G tax credit, which expired on Dec. 31, helps support $165.5 million worth of short-line infrastructure improvements each year it’s in play, said Nordstrom. Yet, action on an extension is playing out much as it has the past several times the measure expired, he said.

The tax credit again has been tacked onto an “extenders” bill that seeks to extend several expired or expiring tax measures, and likely will get enacted late in the year, just it has in the past, Nordstrom said. If it’s extended, the tax credit will cover all of 2014 as well as 2015. As of April 16, a bill proposing to extend the Section 45G tax credit had secured 242 co-sponsors in the House and 50 co-sponsors in the Senate.

“The extension will get passed because we have so much support,” Nordstrom predicted, adding that discussions are ongoing to make the tax credit permanent or at least keep it in place for the foreseeable future.

In addition to the tax credit measure, the short-line industry continues to monitor legislation that would increase truck size and weight — a concern to small roads because they could lose business if such legislation passes, he said.

“The truck-size-and-weight battle won’t ever go away. There will be a fight every two years,” said Nordstrom.

On June 11, there will be a smaller version of Railroad Day on Capitol Hill conducted in Washington, D.C., to help stress the rail industry’s position on larger and heavier trucks, he said. Perhaps the machinations of that day will be shared with attendees of ASLRRA’s 102nd annual meeting, which will be held March 28-31, 2015, in Orlando, Fla.