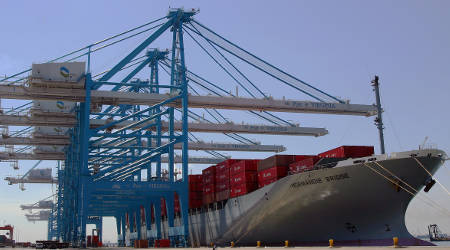 The Georgia Ports Authority (GPA) and Virginia Port Authority (VPA) have filed with the Federal Maritime Commission an "East Coast Gateway Terminal" agreement that would allow the ports to work together to better handle mega-ships, serve customers and improve efficiency.

If approved by the federal regulator, the agreement would allow voluntary cooperation on operational and supply-chain efficiencies, safety, communications and customer service, port officials said in a jointly issued press release.

Additional areas of cooperation would include the purchase and use of joint marketing materials and sharing best practices in terminal operating systems, training, cargo handling, access, turn-times and infrastructure.

In addition, the agreement would support the joint promotion of all-water routes from the U.S. East Coast to the international marketplace via the Panama Canal.

As larger vessels and cargo exchanges increase along the East Coast due to the opening of the expanded Panama Canal last year, shippers are increasingly seeking gateway ports that can serve their needs, said VPA Chief Executive Officer and Executive Director John Reinhart.

"The states of Georgia and Virginia have made the necessary investments to prepare for this new era in global trade," Reinhart said. "The East Coast Gateway Terminal Agreement is an innovative collaboration that will allow us to find new ways to become more efficient and effective.”

Georgia and Virginia are not the first terminal operators to file with the commission to share information. In December 2016, APM Terminals, DP World, Hutchinson Port Holdings, PSA International, Shanghai International Port (Group) Co., and the Port of Rotterdam Authority filed the "Global Ports Group Agreement" with the Federal Maritime Commission to promote the efficiency and effectiveness of the container port industry.