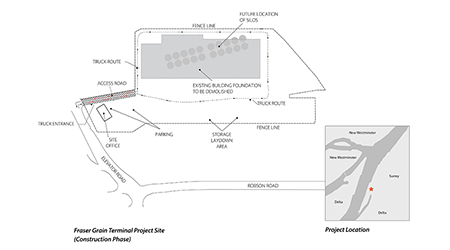 To be served by CN, the 42,000-ton capacity elevator is designed to load 150-car trains under continuous motion on a loop track. The facility also will be capable of unloading trucks in less than five minutes, G3 Canada officials said in a press release.

"This is part of a growing network of high-efficiency facilities that is speeding up the movement of grain in Canada and around the world," said G3 Canada Chief Executive Officer Don Chapman.

Meanwhile, Parrish & Heimbecker Ltd. (P&H) has partnered with GrainsConnect Canada Operations Inc. to build the Fraser Grain Terminal in Surrey, B.C., near the Port of Vancouver.

P&H received a project permit in November for the new terminal, which will be served by CN and Canadian Pacific. Construction is slated to start by year's end.