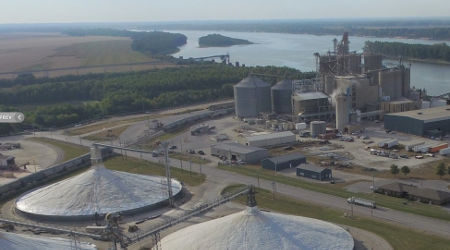 The Consolidated Grain and Barge Co. (CGB) announced yesterday it has completed a $32 million expansion of its soybean processing plant at the Port of Indiana-Mount Vernon.

Announced in fall 2016, the project more than doubled the size of the plant, which opened at the port in 1997. The expansion was designed to increase service for Indiana's soybean farmers, as well as increase product supply for agribusiness customers, CGB officials said in a press release issued by the Ports of Indiana.

CGB originates and markets grain and oilseeds for domestic and international markets.

"We announced our expansion plan here in the fall of 2016 because we were excited about growth opportunities at this Mount Vernon location," said CGB President and Chief Executive Officer Kevin Adams. "This investment means we will remain competitive in this global economy and it underscores our commitment to remain an essential partner in the Indiana agricultural community."