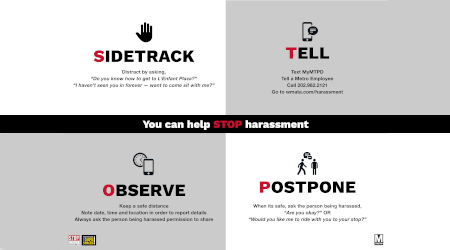 Advertisements, developed to empower riders to report and intervene if they witness or experience an incident of harassment, were placed in stations today, according to a WMATA press release.

The ads feature the message “You can help STOP harassment” with four strategies that spell out STOP: sidetrack, tell, observe and postpone.

The campaign is part of an ongoing effort that began in 2012 to raise awareness and combat sexual harassment on the WMATA system. In a report last year, WMATA officials found that familiarity with the campaign increased the likelihood of reporting incidents of harassment.

WMATA police and volunteers of Stop Street Harassment and Collective Action for Safe Spaces — the organizations that partnered with WMATA to develop the campaign — will provide information to riders during an outreach event at select stations.