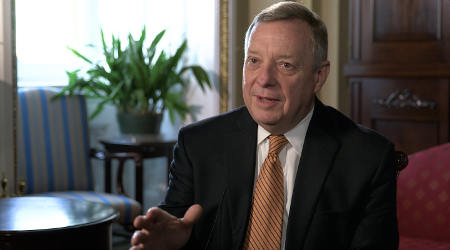 U.S. Sen. Dick Durbin (D-Ill.) earlier this week asked Norfolk Southern Railway to explain how it will curb gun thefts at its 63rd Street Yard on Chicago's South Side.

The most recent theft took place in September 2016, when criminals broke into rail cars in the yard and stole six semi-automatic rifles and nearly 30 handguns, according to Durbin.

"It's clear that more needs to be done by Norfolk Southern to properly secure the 63rd Street rail yard and any potentially dangerous freight shipments stored there," Durbin wrote in a March 14 letter to NS Chief Executive Officer James Squires.

In 2015, thieves stole more than 100 firearms from the yard. The year before, 13 semi-automatic rifles were stolen.

Some of the stolen guns have been traced to gun violence in Chicago, local media have reported in recent weeks.

Durbin has asked NS to provide information about its plan to investigate thefts and prevent future incidents at the 63rd Street Yard.

"If you have undertaken or plan to undertake additional security measures that you are not at liberty to disclose publicly, my staff and I stand ready to meet with you to discuss this matter further," Durbin added.

Norfolk Southern did not respond to a request for comment on its security efforts at the 63rd Street Yard.