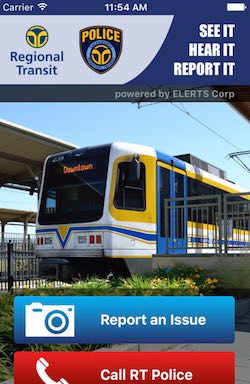 "We need our customers to be engaged and participate in making their riding experience better," said SacRT General Manager and Chief Executive Officer Henry Li. "This app will allow easy connectivity to our staff who can respond and deal with nuisance or criminal activity."

If riders send a report from an area without cellular or Wi-Fi connectivity, it'll be stored and sent once connectivity returns, agency officials added. For those without cellphones, the app allows texting to a specific number.

The app is one component of the agency's recently increased security measures. SacRT is beefing up security to prepare for the opening of the Golden 1 Center arena in downtown Sacramento in two weeks, the Sacramento Bee reported. Several new riders are expected to use SacRT's light-rail system to events at the  arena.

The agency has staffed extra security guards at most light-rail stations, SacRT officials said. There will be at least one agency employee on each train on nights when there are events at the Golden 1 Center.