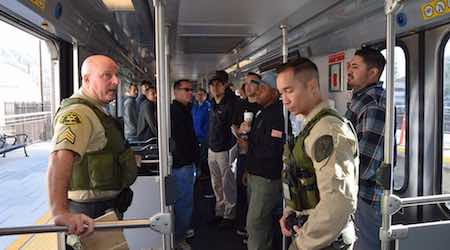 Under a previous contract, LASD was the sole police agency patrolling Metro's buses, trains and facilities.

Nearly 50 percent of Metro's rail lines operate within the city of L.A., Metro officials said in a press release.

The move is aimed at deterring criminal activity on Metro's trains and buses by increasing the number of police on the agency's system. It also is intended to expedite law enforcement response times to incidents on the Metro system since police forces will be able to respond from within their own jurisdictions.

Response times are expected to be reduced from an average 16 minutes to five or six minutes, Metro officials said.

Metro aims to increase law enforcement personnel to a consistent 314 officers, up from the current range of 140 to 200.

"Our overriding goal here is to ensure our transit riders can ride and work safely – without fear – 100 percent of the time,” said Metro Chief Executive Officer Phillip Washington. "Increasing our partnership with local law enforcement agencies is one important part of a multilayered approach that also includes integrating technology and coordinating closely with our federal agency partners to help keep the Metro system safe."

Metro late last year began considering the multi-agency contract, but moved to delay the vote at a Dec. 1 meeting, according to the agency's blog.