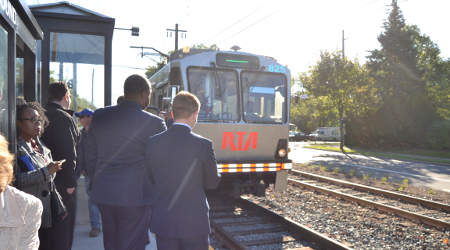 For the first six months of 2018, serious crimes on the Greater Cleveland Regional Transit Authority's (GCRTA) system were down nearly 60 percent compared with the same period in 2016.

That's according to the results of a recent safety audit evaluating crime rates over the past two years.

The audit found that robberies in 2018's first half were down 80 percent and thefts were down 51 percent for the reporting period.

The agency also found a drop in lesser crimes, such as disorderly conduct, which fell 47 percent for the reporting period.

GCRTA officials cited the agency's investment in public safety among the reasons for the drop in crime. The agency has boosted police visibility and increased its police force to 136 full-time sworn officers.

The agency also uses video cameras in every bus and on every train and platform — technology that helps deter crimes, according to GCRTA.